The E-2000R is a gold-colored variant of the regular E-2000, with extra armor and health. It only appears in Sonic Heroes, in the level Final Fortress for all teams except Team Rose. It also appears in Egg Fleet in Super Hard Mode. 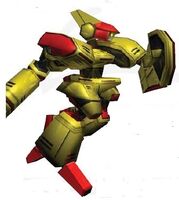