The E-2000 is an E-Series robot that appears in Sonic Heroes.

Its basic form is a red humanoid/avian robot armed with a powerful energy cannon and a shield. It also has the ability to transform into a plane-like shape (if the leader is fly-type character).

The E-2000 appears at the end of the Egg Fleet stage and all over the Final Fortress stage. If using Team Dark to battle the Egg Emperor, two of them will appear on both sides of the Egg Emperor when reaching the large circular platforms.

Most of the time, if an E-2000 is attacked, it will hold up its shield so that it cannot be damaged. If the player uses the Tornado Jump against it, it will be temporarily disoriented but cannot be damaged in this state. After a while, it will fire a laser similar to a small version of the laser cannons in Final Fortress, though this leaves it vulnerable to a counterattack. Another way to get an opening is to use Thunder Shoot and attack the E-2000 while it is stunned (it is recommended to attack with level 0 or 1, since higher levels mainly deal damage and rarely stun the enemy). 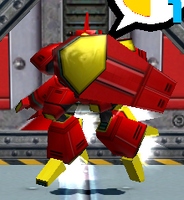