Arriving back at his fortress with two Chaos Emeralds in his possession, Dr. Eggman wasted no time installing both into his new robot, E-18 Guerra-Hard, and waited for Sonic to join the fight. Once Sonic was inside Eggman's fortress, the doctor took direct control of Guerra-Hard, and, using its incredible strength and speed, managed to throw Sonic around like a rag doll, eventually pinning him against a wall. Sonic managed to push back against the hand restraining him though until he could run free and eventually scaled Guerra-Hard and pierced his way into its chest, retrieving the two Chaos Emeralds and using their power to destroy Guerra-Hard.[2]

A super-powered combat robot, Guerra-Hard was powered by two Chaos Emeralds, giving it high super strength and surprisingly fast movements despite it size.[2] 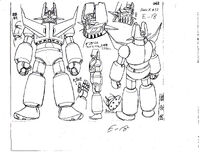 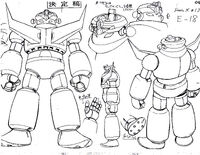 E-Series
Retrieved from "https://sonic.fandom.com/wiki/E-18_Guerra-Hard?oldid=2298957"
Community content is available under CC-BY-SA unless otherwise noted.