E-12 Behemoth is a character that appears in the anime series Sonic X. It is a giant mass-produced humanoid robot that protects Dr. Eggman's fortress.

On Sonic's world, the E-12 Behemoth hordes would at one point fight Sonic and Tails, but with little success.[1] An E-12 Behemoth would also attack Amy Rose, only for Sonic to come to her aid and immediately destroy it.[2]

When Sonic invaded Dr. Eggman's fortress, a number of E-12 Behemoths were activated as the fortress's innermost line of defense. They proceeded to chase after Sonic, and one even managed to knock him back outside of the base's perimeter. However, Sonic soon returned, empowered by a Ring. and proceeded to tear through three E-12 Behemoths before getting into the fortress.[3] Later, the ultrasonic attack from E-70 Noizi alerted an E-12 Behemoth, along with an E-13 Guardbot and E-14 Sneezer, to intruders in the Chaos Emerald vault inside Eggman's fortress. These robots were dispatched to reinforce Noizi, who was engaging Rouge the Bat and Topaz. During the ensuing fight, the E-12 Behemoth was destroyed by a wayward missile from the E-13 Guardbot.[4]

When GUN launched an attack on Eggman's fortress, an E-12 Behemoth was launched to deal with a GUN infiltration group that had entered the fortress, but it was easily taken out when Rouge distracted it and Topaz planted a bomb on its "foot" and was detonated, causing the floor beneath it to crumble away under the robot's weight. A two-pronged attack was later unleashed against the GUN agents inside the base, with an E-12 Behemoth taking on Rouge as her group went on ahead.[5] 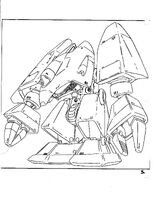