Gamma is not Master. Eggman is Master. Any enemy will be eliminated.

E-101 "Kai" bears a strong resemblance to its previous form in terms of body shape and color scheme, but has been heavily modified into an airborne fighting machine. It has a round black torso with a large white vertical stripe and a large muffler surrounding the pelvic area. It also has a black platform-like head with a large grey shade and a single green "eye" on its otherwise-featureless face that moves from side-to-side.

With its legs removed, the lower torso of E-101 "Kai" has been replaced with a rudder-like black and white tail, and two thin grey and green-colored thrusters on its lower torso, granting it impressive aerial maneuverability. Its arms are also equipped with large shield-like gauntlets with spikes, that resemble those of the Shovel Claws. It also has powerful twin energy cannon weapons mounted underneath each gauntlet, replacing the old twin missile launchers its original counterpart had.

After failing to bring Dr. Eggman the right frog for his plans with Chaos, E-101 Beta was discarded from the Egg Carrier's crew. Beta subsequently was relegated to an Egg Carrier robotics lab where Eggman remodeled it into E-101 "Kai". There, Beta was physically dismembered, its old limbs being discarded on the floor while mechanical arms remade it. During this process, Gamma accidently stumbled into the lab with E-101 "Kai". This horrifying display of Eggman's callous cruelty even towards his own creations would serve as the breaking point that set Gamma on the road to apostasy and defection from the doctor.[2]

After the Egg Carrier crashed, E-101 "Kai" was completed. After Gamma came to the Egg Carrier during his fratricidal crusade to "save" his brethren from Eggman's control by shutting them down, E-101 "Kai" attacked him. While fighting, Gamma tried to convince E-101 "Kai" that Eggman was the enemy. However, because Gamma had deleted Eggman from his master status, E-101 "Kai" only recognized Gamma as an enemy. Eventually, the two robots shot each other at the same time, resulting in both of their destructions, although not before Gamma managed to join hands with E-101 "Kai". Also, after blowing up, the Flicky powering E-101 "Kai" was released.[3]

The final act of E-101 "Kai" before its destruction, which was to destroy E-102 Gamma, ironically assisted in completing Gamma's mission by freeing the birds trapped within both of them. The bird released from E-101 "Kai" would then be reunited with its other family members: a pink bird who had been powering Gamma and a blue bird who had been protected by Amy Rose, all three of them having been separated due to Eggman's evil ambitions.[3]

Although capable of speech, E-101 "Kai" showed no sign of sentience during its time. By comparison, E-101 "Kai" showed even less individuality than its previous form, E-101 Beta, who had at least some emotional capabilities. Regardless, E-101 "Kai" was shown to immensely loyal towards its master, Dr. Eggman, and would ruthlessly attack anyone it perceived as an enemy of the doctor in an effort to eliminate them.[3]

E-101 "Kai" was capable of levitation and could fire powerful lasers from its cannons.[3] 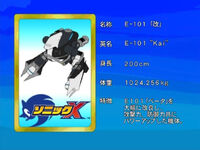