E-10000G (called Robo 2[2]) is a robot created by Dr. Eggman. It was originally developed as a worker robot for the Egg Factory, but its mobility led to it being mass-produced as a series of charged battle robots. It also has a highly efficiency data processing ability.[3]

In Sonic Riders, E-10000G is a Power Type character. However, when met as opponents in the World Grand Prix in Story Mode, he has the abilities of speed, flight and power characters. In Story Mode races, multiple copies of him fill in spots not used by other characters. He is equipped with a large light in its body that it can use to blind opponents, and also punches enemies with its fists. E-10000G's unique Extreme Gear is called the E-gearG and it is unlocked as a playable character by playing for twenty hours. In a normal race, E-10000G can only use Board type Extreme Gear.

E-10000G also appears in Sonic Free Riders as a playable character (though was referred to as simply E-10000 in the E3 demo). His role in the World Grand Prix (Story) mode mirrors with that in Sonic Riders. In a normal race, E-10000G can only use Board type Extreme Gears. 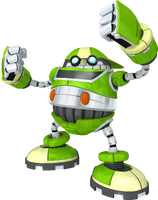 Sonic Free Riders
Add a photo to this gallery

Sonic Free Riders
Add a photo to this gallery