For the Archie Comics interpretation of this character, see Duke of Soleanna (Archie).

His country and its people

The Duke of Soleanna (ソレアナ王, Soreana-ō?, lit. "King of Soleanna") is a character that appears in Sonic the Hedgehog (2006). He was a human, one of the former sovereigns of Soleanna, and the father of Princess Elise. The Duke was the chief scientist and leader of the Solaris Project, an experiment to manipulate time with Solaris for the betterment of mankind. However, the project failed with catastrophic results and ultimately brought the Duke's death.

Following the death of Elise's mother, the Duke resolved to use the power of Solaris, the sun god honored by the citizens of Soleanna, to travel through time and see her again, as well as give humanity the chance to correct its past sins. However, the project became unstable when a device they were using exploded, and Solaris split into two villainous entities: Iblis, the raw power, and Mephiles, the conscious mind. The Duke was gravely wounded in the blast while attempting to protect Elise. Upon the arrival of a time-traveling Shadow and Silver, they both split up to pursue and capture Mephiles and Iblis respectively. The Duke, strangely not surprised to see them, gives Shadow the Scepter of Darkness in order to imprison Mephiles.

Once Silver has caught up to Iblis and psychokinetically paralyzed him, the Duke arrives with Elise. Silver shouts at him to leave, but the Duke replies that it is his duty to ensure that Iblis is not released into the world. With no other option, the Duke uses a Chaos Emerald to seal Iblis within Elise's soul during a ritual. When he is successful, he entrusts Silver to take Elise to a safe place, and, while lovingly stroking his daughter's hair, tells her to remain strong and not to cry under any circumstances, as Iblis would be set free if that were to happen. The Duke then dies, leaving Silver alone in the room with an unconscious Elise in his arms.

Due to the actions of Sonic and Elise in the past, which resulted in the permanent destruction of Solaris, it is possible that the Duke either died from another cause, or he may never have died at all. As he was not seen during the game's ending, his exact fate is uncertain.

The Duke of Soleanna was a seemingly benevolent and selfless humanitarian. He started the Solaris Project for the purpose of helping mankind by controlling time and allow them to correct past mistakes and avoid bitter fates. However, given that he also planned for it to let him and his daughter see his late wife again, it suggests he might have begun the project for his own personal, if not selfish, reasons.

Despite his questionable motives, the Duke had a strong sense of patriotic and kingly duty. Even when on his deathbed, the Duke went through to ensure both Mephiles and Iblis, who were his responsibility, were stopped by giving Shadow the Scepter of Darkness and sealing Iblis inside Elise himself.

The Duke was very compassionate and kind, both as a king and father. He held a great deal of love for his country and its people,[1] and he cared for his daughter dearly, comforting her gently whenever she needed it, even in his last moments. He also believe that a strong ruler would not cry no matter what happened and would often encourage Elise to do so.

The Duke of Soleanna is mentioned in the Sonic the Hedgehog comic book series and its spin off comics published by Archie Comics, though he never made an official appearance. Much like in the game, the Duke and his researchers tried to harness Solaris' powers, but ended up splitting it in half. He died after sealing Iblis inside Elise.

"When the flame has grown large enough, our world will change. Solaris will allow us to control time and move through history. People will be able to rectify past mistake and avoid bitter fate."
—The Duke of Soleanna explaining their plans for Solaris.

"I have my duty. This Living Flame has been entrusted to the royal family."
—The Duke of Soleanna when Silver tells him to leave him with Iblis.

"Eternal Sun! The Living Flame that has been entrusted to the royal family! Fall into slumber with a royal soul!"
—The Duke of Soleanna sealing Iblis.

"Become a strong queen who doesn't cry no matter what happens. And... Live... happily..."
—The Duke of Soleanna's last words to Elise. 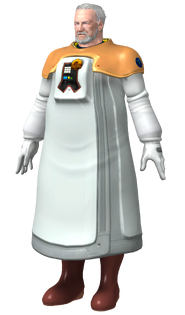 The Duke of Soleanna.
Add a photo to this gallery