Drillinator[1] (ドリリン[2], Doririn?, lit. "Drillin") is the boss of Planet Wisp in the Nintendo DS version of Sonic Colors. It was created by Dr. Eggman.

Drillinator is a robot that has two drills for hands, and uses them to his advantage. Drillinator is painted in a brown and green paint scheme.

During the boss fight, Drillinator will stab its drills into the ground to try and stab Sonic. If his first attack fails, it will sit on its charger and will do a 360 degree spin around the arena in an attempt to injure Sonic. It will restore its Health Gauge during this, so to stop him from healing, the player must use the Yellow Drill and hit the spheres underground. If that attack backfires it'll launch its drills in the air. They will become missiles and chase Sonic. They will shortly retract to Drillinator's arm. Its body can't be attacked itself, but a spherical eye should be located near its body. If Drillinator falls from too much damage, a weak spot shaped like the point of an arrow will be on top of an antenna atop its head. Once attacked, the point will explode, destroying Drillinator completely. 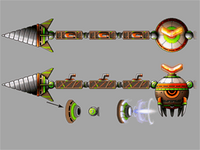