Dreams Come True (ドリームズ・カム・トゥルー, Dorīmuzu Kamu Turū?) is a music duo from Japan, formed in 1988. The band has sold more than 50 million records worldwide, and has been involved with music for the Sonic the Hedgehog series.

Dreams Come True was formed by vocalist and singer-songwriter Miwa Yoshida, bassist Masato Nakamura, and keyboardist Takahiro Nishikawa. The band is commonly known as DCT (Dreams Come True) and sometimes referred to as "Dorikamu" (ドリカム, "Dorikamu"?) by their fans. Dreams Come True released their debut self-titled album in 1989, which sold more than one million copies. Their 1992 release, "The Swinging Star", was the first Japanese album to sell over three million copies, and for several years held the title of the best-selling Japanese-language album of all time. The eleventh track on the album, "Sweet Sweet Sweet", was used as the ending theme for Sonic the Hedgehog 2. An English version of the song titled "Sweet Dream" was released in 1994. In 2006, both versions of the song were remixed by Akon for Sonic the Hedgehog (2006). All versions of the song were later included on Sonic the Hedgehog 1&2 Soundtrack. 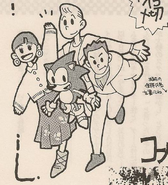 Sonic and the members of Dreams Come True from the November 1990 issue of Sega Players Enjoy Club magazine.
Add a photo to this gallery

Retrieved from "https://sonic.fandom.com/wiki/Dreams_Come_True?oldid=2181631"
Community content is available under CC-BY-SA unless otherwise noted.