Dream Valley before a race

Dream Valley (スプリングバレー[1], Supuringu Barē?, lit. "Spring Valley") is a track that appears in Sonic & All-Stars Racing Transformed, representing the game NiGHTS into Dreams..., primarily its first level, Spring Valley. It is the home track of both NiGHTS and Reala.

The track takes draws inspiration from a number of locales in Nightopia, primarily Spring Valley's calm, peaceful-looking forests with classic NiGHTS elements to be seen. For this track, racers begin with a Rolling Start in plane mode and fly through the canyons of Spring Valley, gaining extra speed by flying through ring formations that change every lap.

Racers will eventually come across a portal that transports them to sections of Nightmare, where the first game's bosses are fought. On the first lap, racers will fly through Gillwing's domain while avoiding flowers and overhead rock formations. On the second lap, they will chase after Puffy as she bounces about and tears through walls for them to fly through. And on the final lap, Wizeman will impede the racers' progress with waves of floating boulders to swerve past.

After each Nightmare section, another portal will transport the racers to a snowy river based on a boat mission from NiGHTS: Journey of Dreams, where trick potential is very high due to the number of jumps, eventually coming to an Ideya Palace that marks the finish line. 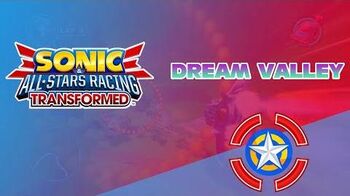