For other uses, see Dragonfly (disambiguation).

A Dragonfly, from the Wii U/PC version of Sonic Lost World.

The Dragonfly[1] (トンバー[2], Tonbar?) is an enemy that appears in the Sonic the Hedgehog series. It is a mass-produced, dragonfly-based Badnik model created by Dr. Eggman with spikes and flight capabilities.

Based off the dragonfly, the Dragonflies are robotic insects with light blue armor. When first introduced, each Dragonfly had two pairs of transparent wings, an ellipsoid thorax with orange stripes, no head, two black eyes, a small mouth, and a long yellow and blue segmented abdomen with spikes.

Over the course of the series, the Dragonflies have undergone slight design changes. In Sonic Generations, the Dragonflies were redesigned with a shorter abdomen and larger, blue eyes. In Sonic Lost World, they were given a darker color scheme, a longer abdomen, their own head, and cyan eyes with no pupils. Finally, in Sonic Mania, they were colored pink and their bodies had six segments instead of seven, though the spiked segment on the end were larger than before.

The Dragonflies first appeared in Sonic & Knuckles and the lock-on game Sonic the Hedgehog 3 & Knuckles, where they are encountered in Mushroom Hill Zone. In gameplay, they repeatedly fly up and down until the player interrupts them. They are also very tricky to avoid, as touching a Dragonfly anywhere else than on its head will damage the player. Only a Spin Jump or a Glide to the head will safely destroy a Dragonfly. Also, upon its destruction, the Dragonfly will release an Animal.

In Sonic Rivals 2, the Dragonfly appears as an unlockable card after getting the high score in Neon Palace Zone Act 3. The card will also unlock the Chao Detector of the previously mentioned Zone.

In the Nintendo 3DS version of Sonic Generations, Dragonflies from somewhere across spacetime appear as enemies in both Acts of Mushroom Hill. In gameplay, their attack patterns and strategy remain the same as in Sonic & Knuckles, and their loud buzzing easily indicates their presence. Beside that, the player can defeat the Dragonflies with the Spin Jump or Homing Attack.

In gameplay, the Dragonflies retain a familiar attack pattern where they fly up and down in one place. To defeat a Dragonfly, the player has to use the Focused Homing Attack on its head. Also, upon its destruction, the Dragonfly will release an Animal.

Dragonflies are capable of flight and are equipped with spikes on their abdomen which they can skewer their foes with.

In the Sonic the Hedgehog comic series and its spin-offs published by Archie Comics, the Dragonfly is a mass-produced model in the Badnik Horde. They have been deployed at a number of locations, most notably Angel Island. 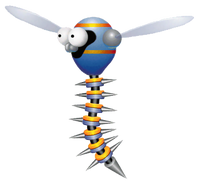