The fun's over, hedgehog.

Dragon Breath is a character that appears in the Adventures of Sonic the Hedgehog television series. He is a bounty hunter Badnik created by Dr. Ivo Robotnik.

Dragon Breath is a large, humanoid robot with spiked roman gladiator-like armor consisting of red, yellow, gray and green colors. Dragon Breath's face also is shaped like a dragon's with yellow spikes on his head.

In the recent past, Dr. Robotnik called in many of his old bounty hunter Badniks, including Dragon Breath, to a bounty hunter convention. Because he did not know where the doctor's convention was though, he asked the inhabitants of a village, only to accidentally frighten them. This made him think that he should look for it himself. Later, at the convention, Robotnik told Dragon Breath and the other Badniks that he wanted them to catch Sonic, and if they did, he would give them one billion Mobiums. Immediately afterward, all the Badniks headed out in an attempt to catch the hedgehog when he revealed himself. Along the way, Dragon Breath told them to split into different groups to catch Sonic, while he went on his own. After Sonic destroyed most of the Badniks, Dragon Breath tried to battle him, only to get tricked by the hedgehog and get crushed by a tree.[1]

In the 16-bit and 8-bit versions of Dr. Robotnik's Mean Bean Machine, Dr. Robotnik assembled many of his old bounty hunter Badniks, including Dragon Breath, and told them to kidnap the Beans that inhabited Beanville so he could turn them into robot slaves using his Mean Bean-Steaming Machine. Later, Dragon Breath was the eleventh Badnik Has Bean battled and defeated.

Unlike most other Badniks, who always act violent, Dragon Breath seems to be an innocent person when he is not on a mission, although he still (unintentionally) ends up frightening other people. He also seems to respect women, often calling them "ladies" and speaks politely to them. However, he is still rather dimwitted, as he does not realize when he is frightening people, and when he does, be believes that they are to blame for this reaction and not him. He is similarly easily fooled by his enemies.[1]

When on a mission, Dragon Breath becomes a very violent robot, who carries out his leader's orders without question. As a bounty hunter, he also loves money, and will do whatever he can in order to earn tons of Mobiums. He also has good leadership skills, like when he told other Badniks to split in different groups to catch Sonic.[1]

Dragon Breath has super strength, being able to walk through walls and even pulling them off with no problems. He also has a very good aim, being able to successfully hit an apple that was on Sonic's head while he was far away.[1]

Though he does not use it very often, Dragon Breath wields a wooden club. While his skills with it are unknown, it is known that he can use the club as an arrow to play William Tell.[1]

Dragon Breath seems to have a rivalry with Sir Ffuzzy-Logik, as during the Beanville incident, he mocked the knight robot by calling him "Ol' Ffuzzy-Fface".

Hey, lady! Which way is the bounty hunters' convention?

Ol' Ffuzzy-Fface got tied in knots, huh? I guess that's why the Doc's sending the boys 'round. So long, sucker! 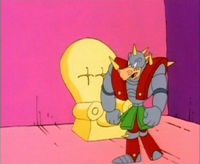 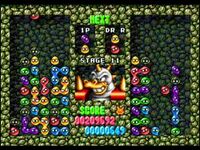