Start a Wiki
watch 01:50
The Loop (Games)
Do you like this video?
Main page Gallery

Donkey Kong (or DK for short) is a strong gorilla who loves bananas. He is Vector's rival in Mario & Sonic at the Olympic Winter Games. His grandfather Cranky Kong was enemies with Mario in the first game, but the current Donkey Kong and Mario seem to be on better terms. Donkey Kong joins Mario and friends as a newcomer in the Mario & Sonic series.

Donkey Kong is a playable character and a Trophy in Super Smash Bros Brawl. He is a heavy weight character with fast running and movement speed. His strong attacks are also quite a fast.

Charge with the B Button, then press again to punch. Stop charging with the Z Button.

Whack standing foes with a mighty head smash to drive them into the ground.

Slap the ground and send nearby foes into the air. Can be performed multiple times in a row.

Attack by beating out a vicious beat on the DK Bongos. DK is invincible - you can power the attack up by pressing the A Button in time with the music.

Donkey Kong made a significant appearance in the Subspace Emissary, he first appeared when he spotted a Koopa's truck filled with a towering stack of bananas. He and Diddy Kong set out to catch the truck. They end up stopping the truck and taking the bananas but Bowser appears with his Dark Cannon. He attempts to trophicate Diddy Kong but his best friend knocks him out of the way. Trophicated, Donkey Kong is captured by Bowser. Eventually, Diddy Kong teams up with Fox and later, Falco who destroys Bowser's Dark Cannon.

Diddy Kong then teams up with Captain Falcon and Olimar and they soon liberate Donkey Kong. Freed, Donkey Kong rejoins Diddy Kong in a quest to stop the Ancient Minister. Donkey Kong eventually reaches the Subspace Bomb Factory and breaks the door open. There, he sees the Ancient Minister's remorse. On Ganondorf's orders, the R.O.B. sentries activate all Subspace bombs. The Ancient Minister, sick and tired of seeing the world disappear, stops the sentries, only to be shot repeatedly by them and combusted. Donkey Kong and the others see this sorrowful event and try to stop the bombs. Then, the Ancient Minister's robe burned and was revealed to be the R.O.B. sentry leader. DK, Diddy Kong, Captain Falcon, Samus and R.O.B. then fend off the R.O.B. sentries. They do not disable the bombs however and R.O.B. breaks down in sadness. Captain Falcon leads everyone out of the factory while DK picks up R.O.B. They are all reunited with the other characters and as a great team, they invade Subspace in search of a solution to the problem. They find Tabuu, who immediately emits a shockwave that trophicates everyone. Donkey Kong and the others are revived by the brave acts of Ness, Luigi and King Dedede who were still under the rubble in Dedede's castle and revived by Dedede's badges. Donkey Kong was also playable in the Great Maze to defeat Tabuu and return the world once and for all.

Donkey Kong appears as a playable character in Super Smash Bros. for Nintendo 3DS and Wii U. He appears as a fast and strong character, along with fast attacks. 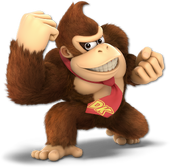 Donkey Kong returns in Super Smash Bros. Ultimate alongside every character in the series that was ever playable.

In Mario & Sonic at the Olympic Games, Donkey Kong was originally going to be playable in this game, but was cut from the final character roster. His data remains however, and he is playable via hacking.

In Mario & Sonic at the Olympic Winter Games, Donkey Kong appears as a playable character and a Power-type in this game. Despite being classified as a Power-Type, Donkey Kong also excels in speed on the Wii version, and he also has average acceleration and below average skill.

Donkey Kong appears as a playable character in Mario & Sonic at the London 2012 Olympic Games. He is again a Power type character, and is also fast compared to the other Power characters.

Donkey Kong appears once more in Mario & Sonic at the Sochi 2014 Olympic Winter Games. He is a Power type character.

Donkey Kong once again appears as a playable character in Mario & Sonic at the Olympic Games Tokyo 2020.