A Dominated Voxai Citizen, from Sonic Chronicles: The Dark Brotherhood.

The Dominated Voxai Citizen is an enemy that appears in Sonic Chronicles: The Dark Brotherhood. They are Voxai residents from Voxai Colony Beta that have been taken over by the Overmind and turned into hostile attackers.

The Dominated Voxai Citizens are normal residents on Voxai Colony Beta. When the Overmind managed to harness the power of the Great Emeralds, turning them power-mad in the process, their metal powers were enhanced to the point where they could take over the minds of other Voxai and act through them, which would turn regular Voxai residents into Dominated Voxai Citizens. When that happens, a Voxai's normal pink hue turns red.

The Dominated Voxai Citizen can only be encountered on Voxai Colony Beta, and will disappear after defeating the Overmind. Their basic attack is slashing their opponents with a ring of psychic energy, which can inflict Poison and can deal two hits per use. Their POW moves are Air Shield, Psychic Wave, which inflicts stun, and Blast. 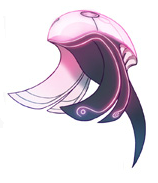