A resort town colored in sea green and sky blue, where the dolphins dance to welcome guests from around the world.

Dolphin Resort is the first racetrack in Sonic Free Riders. It is a resort area, featuring shopping malls, bridges, cafes and aquariums as the main environments of the track. At some points, players will see dolphins leaping up and out of the water. In some points of the level, there are water-based areas in which the player will have to swim underwater to continue or ride on a water-ski.

The track opens up in front of a jump. After the jump, the characters reaches a mall area (although along the way before a curve, there is a barricade which when destroyed by Power skill (keep right) will reach to the mall section faster) where the character can grind on the water path (keep left), go in air-ride mode (keep center), smash the tables in power (keep right) which leads to a shortcut or enter catch mode for some Rings and/or Air. After this, the player then goes into a long curve inside the aquarium, along with a grinding rail. Following from the jump if the character is on the top section, if he/she jumps right at the end, dolphins will leap out of the water launching the character across while on the bottom section there is another, brief air-ride section (keep center). Regardless of what path is taken, eventually the character will come across a water cyclone and will have to swim through it to get to the finish line.

Starting with a long path before hitting a jump, there are opportunities to grab some rings and/or Air in catch mode. After hitting the first jump, a long, curvy aquarium section awaits the character in a series of turns to that of the Standard's version but a grinding rail section (keep right) can bypass these turns at a faster speed.

After the second jump following the aquarium section, the character finds him/herself water-skiing along the surface of the water pulled by a dolphin. There are opportunities for the rider to steer onto shore for air-ride or power sections. If the character can steer the ski to move through the ramps, the water-ski moves faster through the section until the dolphin leaps out, launching the player into a coastal shops section. After the next jump, the player may choose to a short air-ride section or enter catch mode for some Rings/Air before entering the final, tunnel section which has either a path of tables barricading a shortcut for Power (keep left) to smash through or grind on a water path (keep right) before reaching the finish line. 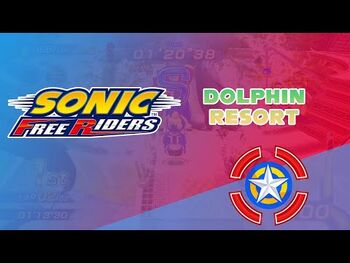