Doctor Thomas Light, the creator of Mega Man. He was once an old friend, and is now my biggest rival.

Dr. Thomas Light is a character that appears in the Sonic the Hedgehog comic series and its spin-offs published by Archie Comics, and is one of the protagonists of the Mega Man comic series. He is a world-renowned robotics engineer from an alternate Earth in the year 20XX. He is the creator of Mega Man, Roll and Proto Man among several others, as well as the founder of Light Labs. When his former colleague Dr. Wily turned to a life of crime, Dr. Light upgraded Rock upon his request from a common helper robot to the super fighting robot, Mega Man, to battle Wily's forces, and has been assisting his son by giving advice and upgrades ever since.

Dr. Light is a tall, male human with thick white hair and a long beard who is somewhat overweight-one of the concepts behind his design was "Santa Claus in a lab coat." Under the coat he typically wears a white shirt with a light brown vest and a blue tie. He also sports red pants and brown shoes, and during the final battle with the Robot Master Army donned Proto Man's helmet and a cannon he built himself out of wreckage from the fight.

During Mega City's celebration of Mega Man's birthday, Dr. Light witnessed his former creation Proto Man (under the alias Break Man) attacking the city, making quick work of Robot Masters Bomb Man, Guts Man and Cut Man. Proto Man then fought Mega Man and was about to defeat him, only for the latter to plead to spared so that his "father" Dr. Light's heart wouldn't be broken. Break Man was about to depart until Mega Man grabbed a hold to unmask him. Before either could do anything further, however, the Genesis Wave struck, rewriting reality across Earth.

After the Genesis Wave subsided, Light got the feeling that he was forgetting something about his past, but put it aside while working on Bond Man. He, alongside Rock and Roll also witnessed a breaking news report regarding the Mega City Federal Reserve being attacked by four unidentified robots, with Proto Man fighting against them. Mega Man later informed him of a strange portal that appeared when a strange blue blur appeared and had the other robots escape as he entered the portal in pursuit.[1] A damaged Proto Man later arrived at Light Labs with information on the Warp Ring, and to Light's relief allowed Roll to take him aside for repairs. He also was contacted by Time Man about a time-space anomaly, and sent a message requesting Duo's aid in solving the spacial imbalance.[2]

Dr. Light eventually was kidnapped by Bass and Metal Sonic under the orders of Wily and his new partner, Dr. Eggman and taken to the Wily Egg in the Skull Egg Zone pocket dimension, although not before creating a recreation of the Warp Ring to allow Sonic the Hedgehog and Mega Man to enter Mega City.[2][3] From there, Light was held prisoner in the Wily Egg and learned that Dr. Wily and Eggman had rewritten their universes with the Genesis Wave in an effort to defeat their blue enemies. While enduring gloating from the evil doctors, Light also supplied information to Rouge the Bat regarding the Wily Egg's weakpoint.[4][5] As Wily and Eggman's Robot Master Army fought Mega man and his allies, Light was nearly killed by a Motobug and Mettaur, although they destroyed themselves by accident due to their bumping into each other. He thus attempted to convince Wily and Eggman of the foolishness of their plans to reshape the universe, reminding both scientists of various instances when they had attempted similar things. Unfortunately, his references to other threats were dismissed by both doctors.[6]

Using the Motobug and Mettaur's parts, Light tried to create a radio system to send an SOS signal. However, the signal was too weak to penetrate the Wily Egg's exterior and only succeeded in giving him away to Eggman's robots, who likewise informed Eggman of Light's transmission. Thomas was later thrown out by Eggman into the crater beneath the Wily Egg, largely because Eggman deduced how much of a threat he was to his and Wily's plans,[6] but was saved by Shadow the Hedgehog's Chaos Control. He later aided the Proto Man and Sonic's allies in fighting the Robot Master Army in order to hold them off while Mega Man, Rush, Sonic the Hedgehog, and Miles "Tails" Prower infiltrated the Wily Egg. When Rush returned with a badly wounded Tails, Dr. Light examined him but due to his lack of medical experience was unable to do much for the heroic young Fox.[7] After Light's original Light Robot Masters arrived as the cavalry, Light, Knuckles, Rush, and Proto Man, having deduced that Mega Man and Sonic ran into trouble, infiltrated the Wily Egg themselves while the Robot Masters provided cover. Afterwards, Light, after freeing Mega Man and Sonic, aided them in trying to shut down the Genesis Wave Generator, although because the controls were out of reach, he could not disable it, resulting in a backup plan where Sonic and Mega Man would adopt super forms to undo the Genesis Wave with Chaos Control. He joined Knuckles and Proto Man in fleeing the battle between Super Armor Mega Man and Super Sonic and the Egg-Wily Machine X, but was engulfed by the Super Genesis Wave. Fortunately, Super Mega Man later reversed its effects, returning his reality to normal and Dr. Light to his proper place in time.[8]

After the apparent death of Dr. Wily after his most recent scheme that left Light Labs in ruin, Dr. Light soon had Light Labs back up and running with the aid of the Light Robot Masters.[9] Unfortunately, Mega Man disappeared while on a supply run, and Sonic Man appeared and attacked Mega City. Reluctantly, Light allowed his original Robot Masters to engage Sonic Man. only for them to be defeated. Dr. Light then called upon the eight Wily Robot Masters who had chosen to be reprogrammed and reformed, and called upon them to fight against Sonic Man. Quake Woman also volunteered to help out, as she knew that the situation was upsetting to Roll, and the nine robots quickly entered the fray. Sadly, both they and Break Man failed to overcome the threat, and Sonic Man activated a Unity Engine that began merging Earth with Sonic's World.[10][11] This led to an encounter between Dr. Light and his robotic allies and the Freedom Fighters, who were soon joined by X and the Maverick Hunters and Team Sticks.[12]

Some years into the future, Dr. Light created an even more advanced type of robot with the capacity for human emotion. Dubbing his creation Mega Man X, Light placed him in a protective capsule that would analyze his systems and insure that they wouldn't break down, doing so because the process would take longer than he had left and he had no successors to carry on his work. X would later be awakened in the year 21XX-a century after the time of Mega Man-and become the template for a new race of robots, the Reploids. X made it his mission to fulfill Light's dream, but would face difficulty in the rise of the Mavericks, a group of robots who turned against humanity due to infection by a virus and through conscious rebellion against their creators.[13]

Dr. Light is an idealist whose greatest hope is that his robotic creations can make life better for humans. He is tremendously proud of his "children," caring for them with all the affection of a father for biological offspring, and expressing concern for them as well. Like Mega Man, he has been reluctantly forced to stand up and defend the world from the predations of Dr. Wily and other evils, typically doing so by aiding Mega Man from the sidelines. Despite the many betrayals Wily has dealt him, however, Light has never ceased his efforts to help his former colleague see reason, particularly when the latter takes a path of self-destruction that Light has seen him walk all too often.

Dr. Light is a brilliant scientist and an expert in terms of robotics and machinery. He is capable of cobbling together useful gadgetry from even the meanest spare parts, and while he abhors violence is a capable shot.

Dr. Light on the cover of Worlds Collide #10. 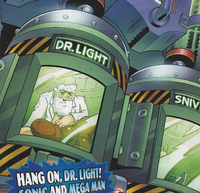 Dr. Light captured in a capsule.