Dr. Robotnik in the Flame Craft.

Doctor Robotnik’s Flame Craft[1] (フレイムモービル, Fureimu Mōbiru?, lit. "Flame Mobile") is a vehicle from the Sonic the Hedgehog series. It is a blue vehicle that fires fireballs that was created by Dr. Eggman during the first part of the Angel Island incident.

Dr. Robotnik's Flame Craft is a single-person floating vehicle, which can fly in the air like the Egg Mobile. Like the Fire Breath, it is dark blue in color and is equipped with two steerable cannons on either side that shoot fireballs at the screen. It also has a small orange dome at the bottom of the mobile.

Later, an Eggrobo piloted a rebuilt Flame Craft and confronted Knuckles with it. However, the vehicle was nothing for the echidna and the Flame Craft was destroyed again.

The Flame Craft returned as one of the three mobiles Dr. Eggman could pilot in SEGA Heroes.

A floating vehicle with two "arms" that fire fireballs. The player has to hit it eight times to defeat it.

Doctor Robotnik's Flame Craft first appears moments after Sonic/Tails/Knuckles outrun the bombs dropped by the Flying Battery. It flies past the player in the Act's background, before disappearing behind a huge waterfall. When Sonic crosses a wooden bridge, the Flame Craft emerges through the waterfall and drops a fireball on the bridge, destroying it. The player is able to fall into a bottomless pit if the playable character is standing on the bridge when it is destroyed.

The Flame Craft will then disappear behind the waterfall, becoming impossible for Sonic to hit, and emerge again in a new location to fire its weapons at Sonic again. Robotnik will move in certain patterns, either to the far right, upper left corner or left side. Robotnik will fire two fireballs each time it emerges, and Sonic will only be able to use the Spin Attack on it again during those times. After eight hits, the Flame Craft will be destroyed, and the floating Capsule will lower from the top of the screen. Opening the Capsule ends the level, after which the player will move on to Hydrocity Zone after Knuckles destroys the second bridge.

When playing as Knuckles in Sonic the Hedgehog 3 & Knuckles, the player enters the arena from a different pathway. EggRobo is seen piloting the vehicle using a similar pattern of attack, but is able to fire four fireballs at one time. After landing eight hits on the vehicle, opening the capsule and clearing the Zone, Knuckles will hop from the waterfall and the game will progress to Hydrocity Zone. 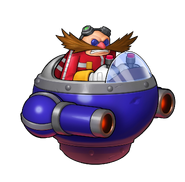 SEGA Heroes
Add a photo to this gallery