Welcome to Eggman's Incredible Interstellar Amusement Park, where you can enjoy five planets for the price of one!

Doctor Eggman's Incredible Interstellar Amusement Park (エッグプラネット・パーク, Eggupuranetto Pāku?, lit. "Egg Planet Park"), also known as Egg Planet Park,[1] is a location that appears in the Sonic the Hedgehog series. It was an amusement park built by Dr. Eggman in space, until it was destroyed by a black hole one day before its opening.

According to Takashi Iizuka, the reason why Sonic Team "wanted Dr. Eggman's Incredible Interstellar Amusement Park in space because it's so huge. The scale of it is so ridiculously huge that no planet could really accommodate it. [They] wanted to really show that his amusement park is so big that it has to be in space."[2]

Dr. Eggman's Incredible Interstellar Amusement Park was, as its name hints, a colossal amusement park that stood over Sonic's world, notable for being located beyond the planet's atmosphere. Its center and main area, the Tropical Resort, held various hotels and shops, and was chained to the three different planets and two other regions in outer space. All of these planets and regions were connected to the Tropical Resort through "Space Tapes" that were maintained by large tractor beam generators located on them.

Despite the large variety of environments the amusement park housed, all of them were full of colorful lights and friendly-looking Egg Pawns welcoming the visitors. They also had various rides and other buildings that fit the theme of the planets and regions. However, Dr. Eggman himself had repeatedly stated in his PA announcements that the park was very dangerous and performed very poorly in healthcare control, with the planets being filled with torture device-like rides and polluted areas.

The idea of building an amusement park in space was conceived by the evil Dr. Robotnik, later Dr. Eggman, years ago. Thus, the doctor began building his amusement park, not being able to finish it until years later.[3]

In the Wii version of Sonic Colors, having almost finished his amusement park, Dr. Eggman had kidnapped several planets inhabited by the alien Wisps and chained them all together at his amusement park. The reason behind this was because the Wisps possessed a powerful energy source known as Hyper-go-on, which the doctor wanted to use to power his Mind Control Ray to enslave Sonic's world with. To harvest the Hyper-on-on he needed, Eggman created a factory on Asteroid Coaster, where Wisps were drained of their Hyper-go-ons, which had the side-effect of mutating them into Nega-Wisps. As a cover story for the construction of Dr. Eggman's Interstellar Amusement Park and his hidden operations on the different planets, Eggman claimed that he had developed a sense of remorse for his past transgressions and that he had built his amusement park to make up for them.[3]

On the day before the park's inauguration, Sonic and Tails took a trip to the park's Tropical Resort. Sonic was not trusting Eggman's intentions, but Tails told him to simply enjoy the place. Eventually however, they found Orbot and Cubot, Eggman's lackeys, chasing a White Wisp, named Yacker, and a Cyan Wisp. After Sonic saved the Wisps, the Cyan Wisp phased into his body, giving him the Cyan Laser Color Power. Full of questions, Sonic and Tails tried to communicate with the Wisps, though they were unable to because of the fact that they spoke a different language. As such, Tails started to create a translator from his Miles Electric to communicate with the Wisps while Sonic continued to investigate the park. Eventually, Sonic found Eggman, Orbot and Cubot, who were counting kidnapped Wisps. Frustrated over the fact that Sonic kept getting in his way, Eggman ordered the release of Rotatatron to destroy the hedgehog as he and his lackeys left the scene. However, Sonic easily defeated the robot. During the battle though, one of the robot's arms got lodged into Eggman's Mind Control Cannon without anyone knowing it.

Returning to Tails, who had just finished his translator, Sonic learned from Yacker that Eggman was kidnapping the Wisps. With this information in mind, Sonic, Tails, and Yacker started to make their way across the park's attractions to free the Wisps and unravel Eggman's schemes. Sonic would also deactivate the tractor beam generators that held the Wisps' planets captive, gradually liberating the planets from Eggman's control.

After having freed all the Wisps and their planets, Sonic and Tails started to celebrate with them in Tropical Resort. Meanwhile, Eggman tried activating his Mind Control Cannon to enslave the world, having acquired enough corrupted Hyper-go-on energy for that feat. However, the cannon backfired and created a black hole made of corrupt Hyper-go-on as a result of the damage caused by the arm of the Rotatatron/Globotron. With no other option but to escape, Sonic and Tails went to the elevator that lead back to their world, only to find Eggman awaiting them in his Nega-Wisp Armor. Forcing Tails into the elevator and sending him safely back home, Sonic started to fight the doctor, who used the Wisps for his advantage. After gathering enough Wisps for himself however, Sonic performed the Final Color Blaster on the Nega-Wisp Armor, destroying it for good. Meanwhile, the black hole would consume the rest of the park until it was extinguished by the Wisps.

In the console/PC version of Sonic Generations, a past version of Dr. Eggman's Incredible Interstellar Amusement Park got transported to White Space as a side-effect of the Time Eater's time-traveling, where it was drained of color and life.

The attractions of the park were the last areas Modern Sonic and Classic Sonic paid a visit to after ending up in White Space. Inside the park, the Sonics were able to fix space, thereby restoring the park from its lifeless states. When the Time Eater later got destroyed, Dr. Eggman's Incredible Interstellar Amusement was seemingly returned to its rightful place in the timeline.

In the Sonic the Hedgehog comic series and its spin-offs published by Archie Comics, Dr. Eggman's Incredible Interstellar Amusement Park is an amusement park in the In Another Time, In Another Place universe. Like its game counterpart, it was built by Dr. Eggman as part of a scheme involving the Wisps. 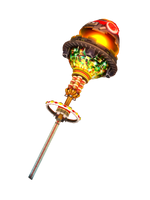