The ocean is... so nice... Waves are just so... reassuring. So regular. Like... old friends that always come back... sharing familiar conversations.

Dive is a character that appears in the Sonic the Hedgehog comic series and its spin-offs published by Archie Comics. He is a mobian lemming, and a member of the Pirates of the Setting Dawn.

Dive is a mobian lemming roughly around the height of Espio the Chameleon. He has light purple fur, light pink skin, blue eyes, and round ears. His attire consists of a sky blue scarf, as well as brown gloves, belt and boots.

While travelling the seas alongside his shipmates, Dive encountered Echo the Dolphin, Razor the Shark, and the Chaotix, all of whom had been captured.[2] In a bold attempt to start a fight, Vector the Crocodile, the Chaotix's leader, grabbed Dive and hurled him halfway across the deck, much to Dive's displeasure. Later, Dive would help Vector secure Echo's convertible, expressing his love for the sea to the detective.[3]

Dive is spacey, nervous, and somewhat distant, often prone to zoning off.[4] Another prominent trait of his is his immense love for the sea.[3] 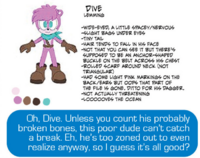 Retrieved from "https://sonic.fandom.com/wiki/Dive?oldid=2286486"
Community content is available under CC-BY-SA unless otherwise noted.