Diamond Select Toys (sister company of Diamond Comic Distributors, Inc.) is an American company founded in 1999 that creates collectibles based on pop culture properties for adult collectors. Some of properties they have produced for include Marvel Comics, Transformers, Halo, and Star Wars. Their collectibles mainly consist of items such as action figures, busts, statues, and "Minimates" and "Vinimates" figures. In 2018, it was revealed that DST would be creating collectibles for the Sonic the Hedgehog series.[1]

Diamond Select Toys announced they would be producing Minimates based on the "Sonic" series.[1] Minimates are 2-inch tall mini-figures, that are fully posable, and have a block-like design similar to a Lego mini-figure.

The following week of the announcement, prototypes of the first Minimates were revealed at Toy Fair New York 2018. The figures on display included Sonic, Tails, Dr. Eggman, Amy, Cream and Cheese, and Silver.[2]

In December of 2018, it was announced the first box set of Minimates would be releasing in January, 2019.[3] The figures included in the set were Sonic, Tails, Amy, and Dr. Eggman. Each figure features fourteen points of articulation, interchangeable parts, and a clear display stand.[4]

Diamond Select Toys announced they would also be producing Vinimates based on the "Sonic" series.[1] Vinimates share the block-style design of Minimates, but are twice their size at 4-inches tall, and are only have posability in the head.

Part of DST's original announcement also mentioned gallery PVC dioramas. These were revealed at Toy Fair 2018 and were on display alongside the Minimates.[2] The dioramas shown included one of Sonic dashing through Green Hill Zone with a Ring in one hand and a Chaos Emerald in the other. The other diorama depicts Tails flying and reaching for a Chaos Emerald, above a checkerboard pattern that wraps around the scene. They released in early 2019 for $50 each, exclusively at GameStop.

A diorama of Sonic in his Speed Star for Team Sonic Racing was on display at New York Toy Fair 2019. It has a release date of Spring 2020 and a SRP of $50. 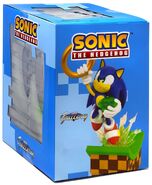 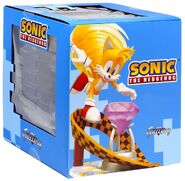 Tails packaging
Add a photo to this gallery

A vinyl coin bank of Sonic in a Spin Attack was released on 22 January 2020 for $24.99. At New York Toy Fair 2020, prototype concepts of action figures of Classic Sonic, Tails and Knuckles were on display.