Shadow facing Sonic and Diablon, from Shadow the Hedgehog.

This is for my family... and for Maria! I'll settle this once and for all, with my own hands!

The U78-X/D "Diablon" is a combat vehicle that appears in the Sonic the Hedgehog series. It is prototype[1] energy-charged weapon[2] built by the Guardian Units of Nations and is one of the final bosses in Shadow the Hedgehog. It took the form of a large red mecha that was directly or remotely piloted by the Commander and fought alongside Sonic the Hedgehog against Shadow the Hedgehog after the Dark mission was completed in the levels GUN Fortress, Black Comet, and Final Haunt in story mode. Both Sonic and the Diablon were defeated by Shadow by using the latter's weaknesses against it.

The Commander used Diablon to try and avenge those who died on the Space Colony ARK (Including Maria Robotnik and his family)[3] by fighting alongside Sonic in the hopes of taking down Shadow, whom he viewed as responsible for the incident on the ARK. The duo fought well, but they were both defeated at the Ultimate Life form's hands by Shadow's exploitation of Diablon's weaknesses.

After destroying the three Mother Computers in GUN's last stronghold on the entire planet, Sonic and Diablon confront Shadow in one last attempt to stop him from fully realizing the Black Arms' ambitions. After the Commander blames Shadow for the ARK incident and vows to destroy him, Shadow simply smirks and states his intentions to bring order to humans, and to make them "pay with their lives" for their crimes.

After Shadow defeats the duo, his inner turmoil drives him insane, and he regresses into the living weapon of mass destruction that Professor Gerald Robotnik reprogrammed him to be. He vows to use the Chaos Emeralds to destroy the Earth, and laughs maniacally as he stands over a beaten Sonic.

Sonic and Diablon confront Shadow after he fights off GUN's counterattack on the Black Comet. Like in GUN Fortress, the Commander blames Shadow for what happened aboard the ARK 50 years ago, but Shadow smirks as he prepares to serve "justice" to humanity.

After the duo fail to compensate for the counterattack's failure, Shadow becomes Black Doom's second-in-command, believing Black Doom's views that humans are evil. He vows to use the Chaos Emeralds to conquer Earth and turn it into a dark empire, before laughing maniacally.

Shadow is confronted by Sonic and Diablon after turning on the Black Comet's Defensive Energy Shields, sealing off Black Doom's inner sanctum from the impending counterattack by GUN, with Sonic questioning Shadow on why he would turn against Earth at the last minute and help the Black Arms when their defeat was seemingly imminent. Shadow then replies that he was not necessarily "siding" with the Black Arms, but his motivation for doing so was to oppose Sonic himself and prove his superiority by defeating both him and the Black Arms.

After battling the duo and emerging victorious, Shadow stands over a defeated Sonic, who in turn muses that he "didn't think [Shadow] had it in him". With the Chaos Emeralds in tow, Shadow proclaims himself to be the strongest hedgehog in the world, and laughs triumphantly.

Diablon was fitted with an electromagnetic barrier that, when activated, deflected most projectiles, including firearm shots,[4] laser blasts and even physical blows. In terms of weaponry, it had a laser cannon secured on its forehead that could fire long-ranged laser beams in any direction,[5] and also had a chargeable Antimatter Cannon[6] (反物質粒子砲, Hanbusshitsu Ryūshi Hō?, lit. "Antimatter Particle Cannon") which could destroy easily damaged objects in a large dome-shaped radius around Diablon after charging up enough energy.[7] Apart from that, the only other abilities Diablon was seen to use were hovering and moving around in the air by using its jet boosters, and swiping at enemies with its hands. It is stated in game that Diablon was a prototype and possibly not yet fully equipped for combat before being called into action against the Black Arms and Shadow.

Though Diablon's electromagnetic barrier could deflect various assaults, when the barrier was shut down so Diablon itself could strike its foe, it was considered "nothing but mere scrap iron,"[1] leaving it wide open to firearm and physical attacks. The head appeared to be its weak-point, as Black Doom ordered Shadow to strike it.[8] It was also vulnerable to Chaos Blast attacks, even with its barrier in place. However, at the beginning of the fight, the head is too high to reach by simply jumping, so players must try and use the Homing Attack when Sonic jumps to propel Shadow high enough to hit the robot's head.

Diablon, from Shadow the Hedgehog.

During the boss battle, Sonic and Diablon, Diablon is the only boss that can be damaged; Sonic cannot be damaged but can be knocked down. Shadow's guide during this battle is Doom's Eye.

The player must use the Homing Attack on Sonic while Sonic is jumping to bounce off Sonic to reach and attack Diablon for the first quarter of the fight. Once around 25% of Diablon's health is depleted, its repulsers will fail, allowing the player to attack without having to hit Sonic first. Diablon will use more attacks once on the ground either by grabbing at the player at close range or firing a laser and will still have its electromagnetic shield around it to protect it when it is not attacking. It is vulnerable as it attacks, so the player must Diablon while it is attacking. When the Commander says "Charge complete," it will prepare to use the antimatter cannon, which the player can avoid by running out of the indicated area representing the attack's range. Sonic will try to use the Homing Attack on the player in the meantime which the player can jump to repel this. When the Dark Gauge is full, the player can either use the Chaos Blast can pierce Diablon's shield, or if the player has a weapon, they can make use of Dark Shadow's invincibility and unlimited ammunition to quickly damage Diablon the moment it lowers its shield to attack. 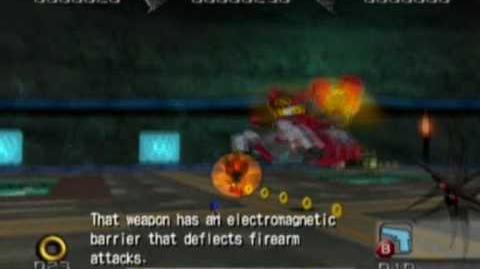 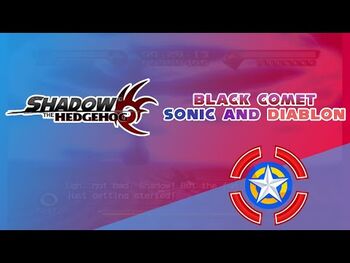 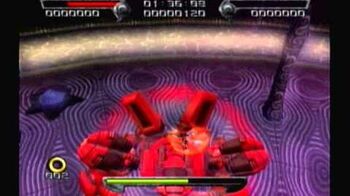