Devil Doom, from Shadow the Hedgehog.

I gave you life and yet you defy me? So be it! You shall pay for your ingratitude with relentless pain!

Devil Doom (デビル・ドゥーム, Debiru Dūmu?) is the final boss of Shadow the Hedgehog. He is a giant, two headed, gargoyle-like creature and he is the super-powered version of Black Doom. He transforms into this form after discovering Gerald Robotnik's secret plan to destroy the Black Comet, but met his end at the hands of Super Shadow.

In this form, Black Doom becomes much larger and intimidating than before; his body is almost completely changed. The only traces of his original form is Doom's Eye, his horizontal horns, and his red and black skin.

As Devil Doom, Black Doom has two gargoyle-like heads on either side of his torso, the first of which has Black Doom's horizontal horns and the second which has one vertical horn, and two large and thick round wings. The lower half of his body is rooted to a large boulder and his torso has strange spines pointing down. He also has horizontal mouth parts similar to the Black Bull, with the exception of a jaw on both sides. Devil Doom has no eyes himself; instead, Doom's Eye switches between his heads to give them sight. Devil Doom also gains an extra finger on each hand, making it possible for his arms to operate from either side of his body, making his shoulders double jointed.

As Devil Doom, Black Doom's powers increase to the point where he can fight on par with even Super State users. In addition to retaining the ability to use Chaos Control to teleport, Devil Doom can now breathe fire, move objects at the size of buildings around telekinetically so to use them as either shields or projectiles, and channel fire-like lasers through rocks.

Devil Doom can sense where Shadow is, as his attacks are of the same precision whether facing Shadow or not. His body is also virtually invulnerable and does not feel pain, even from a charged Chaos Spear. Devil Doom's wings are an oval shape, enabling equal use by both heads. Although his wings can be crippled, making him vulnerable to side attacks, he can put either one of his wings in front of the eye to protect himself.

Devil Doom's weakness is Doom's Eye. When it attaches to Devil Doom, it creates a vulnerable spot in his otherwise invulnerable physique, making it possible to harm him.

A battle that takes place above Central City. The player takes control of Super Shadow and must attack Doom's Eye until Devil Doom's Health Gauge is depleted.

In Shadow the Hedgehog, Devil Doom is battled by Super Shadow high above Central City. Devil Doom has a set behavior depending on the situation.

The first type of attack that Devil Doom uses is floating in front of Shadow with a ring of debris. He may throw it at Shadow. If Shadow gets hit, he will be momentarily sent backwards. Shadow should use rapid Chaos Spears to destroy the debris in order to avoid the delay. There are ring balloons in the debris. Rings are vital because if Shadow runs out of them, he'll fall and lose a life. Therefore, he must try shooting at the Ring balloons.

Devil Doom will also attack by spitting a wall of fire at Shadow is the second type of attack. To avoid them, Shadow can veer off to the edge. The boss can command the small meteors floating around him to shoot lasers. He can also make the meteors fly around him in circles and shoot lasers. The lasers won't hit Shadow if he moves constantly. If Shadow is too close for a long time, or sometimes as he reaches Devil Doom, Devil Doom will teleport away. This also happens after Devil Doom is damaged.

The only weak point of this boss is its eye, which alternates between the heads after being attacked. To damage the eye, Shadow can use charged or uncharged Chaos Spears, with the charged spears dealing more damage. Uncharged Chaos Spears can also be blocked by Devil Doom's wings. Shadow can attack the wings and destroy them so Devil Doom can't block attacks any more. Both attacks only work when Shadow is near him. Shadow's dark gauge can be filled by shooting city debris while the hero gauge is filled by attacking Devil Doom and the meteors around him. Chaos Blast can help with the debris, but it does not deal much damage to the eye. Chaos Control slows everything down and may come in handy but it also makes aiming more difficult. 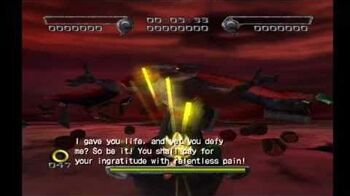 In the Sonic the Hedgehog comic series and its spin-offs published by Archie Comics, Devil Doom is Black Doom's transformation. In a brief flashback to the comic's events of Shadow the Hedgehog Devil Doom is shown fighting Super Shadow, but was defeated in the ensuing battle.

"Why? Why can't you understand that these humans are the parasites of this world? Absolute power is the only way to bring order to the planet... The humans must be eliminated! Shadow, open your eyes. Realize, that sympathizing with these humans, has all been a mistake!"
—Devil Doom to Shadow, Shadow the Hedgehog

"Before long, the gas from this Comet will have spread over the entire planet... Shadow, cease these futile attempts to resist. You alone cannot change this planet's fate!"
—Devil Doom telling Shadow that he cannot save the world, Shadow the Hedgehog

"I see... I seem to have underestimated the true power of the Emeralds. No matter! I will destroy you all the same!"
—Devil Doom when his Health Gauge is down to half, Shadow the Hedgehog

"The time has come! Now, that the gas has overrun this tainted world, MY reign has BEGUN! Mwahahahahaha!! Hahahaha! HAH-hahahaha!!""
—Devil Doom upon infecting the planet, Shadow the Hedgehog

"Im... impossible! I am the supreme being that rules this universe! I am the immortal life form! I am the ultimate power! Gaaaah!"
—Devil Doom once he is defeated, Shadow the Hedgehog