Sonic News Network
Register
Don't have an account?
Sign In
Advertisement
in: Adventures of Sonic the Hedgehog characters, Robots, Villains

The Design Unit Flexible Underling Substitute,[1] also known as D.U.F.U.S.,[1] is a character that appears in the Adventures of Sonic the Hedgehog television series. He is a prototype D.U.F.U.S. robot that is able to do almost anything. He was originally loyal to his creator, Dr. Quark, but he began to experience a radical shift in personality over an error, which ultimately ended with him abandoning Dr. Quark.

The Design Unit Flexible Underling Substitute is a humanoid robot. His body is mainly dark green/blue. His frame is rather bulky and he has four red circles on each side of his torso. He also has two red eyes that give off a menacing glare.

In the present day, D.U.F.U.S. was used by Dr. Quark during his rivalry with another evil genius, Dr. Ivo Robotnik. When the doctors formed a truce to catch Sonic and Tails, D.U.F.U.S. managed to catch the heroes by turning himself into a cage. However, when Robotnik's minions, Scratch and Grounder, accidentally freed their enemies, D.U.F.U.S. was tricked by Scratch into believing that he had accidentally set Sonic and Tails free when he went to check on them. This made the robot think that he had committed an error, which he was not supposed to do. This also confused him, which caused him to do several weird things later, like making Robotnik and Quark kiss each other. Ultimately, he ended up abandoning his creator to live a life with surfing and skateboarding.[1]

Originally, D.U.F.U.S. was evil and completely loyal towards his creator, Dr. Quark. He was likewise calm and emotionless, speaking in a monotone voice, and had a habit of presenting the odds of outcomes through calculations. However, after being influenced by Scratch and Grounder, he became more rebellious. He eventually picked up the habit of talking back to Quark and insulting him, eventually abandoning him all together. He also became laid-back and started to enjoy skateboarding and surfing.[1]

Despite being a robot, D.U.F.U.S.'s frame is very flexible, almost to the extent of being a liquid. He can freely change his shape, colors and features. He can for example shapeshift into a wheel to move around on, a cage to trap Sonic in, a picnic table, a bench, and a surfer riding a wave. D.U.F.U.S. can also think one hundred times faster than a supercomputer. He is also shown to be very strong, being able to carry Dr. Robotnik and Quark at the same time.[1]

"Of course, the mathematical probability can be altered; if you were to combine forces, the success/failure ratio is 4062·1."
—D.U.F.U.S., "Robotnik's Rival"

"Whaaaaaa? I am confused! I have committed an error! That is impossible..."
—D.U.F.U.S., "Robotnik's Rival" 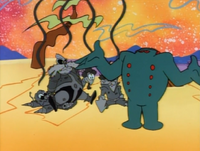 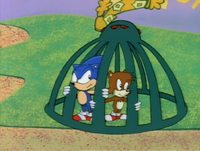 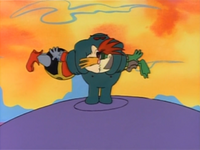