Desert Ruins is a stage in Sonic Runners that was playable for an event.

It looks visually similar to its appearance in Sonic Lost World and has the distinct touch of changing the time of day depending on how far you've progressed in the level.

Team Sonic discovers a fragment of the world of the Arabian Nights above their world and decide to go there to hunt treasures. Along the way, they discover that the Erazor Djinn has been freed, but got split into a thousand weaker pieces which Eggman, who has taken King Shahryar's place, is gathering one hundred of to form a super-djinn to take over the world with. Using Eggman's own strategy against him however, Team Sonic stopped Eggman and restored Shahryar to the throne.

Being a special event, the stage is suitable for all ability types of characters, featuring the same obstacles and enemies encountered in Windy Hill, Sky Road and Lava Mountain.

The event started on 16 July 2015. This Event introduced the Desert Ruins as a Special Stage. Here, the player can collect treasure to climb up the rankings, unlock prizes and more. The Event also introduces three new buddies: the Erazor Djinn, Magic Lamp and Desert Chao. Erazor Djinn can be obtained by collecting treasure while the remainder can be obtained on the Premium Roulette. 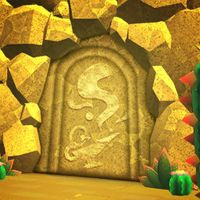