A desert with Egyptian ruins

Desert Ruins (デザートルーインズ, Dezāto Rūinzu?) is the second world in the Wii U version, PC version and Nintendo 3DS version of Sonic Lost World. It is a generic desert-themed Zone with numerous sand tornadoes and some platforming puzzles inside pyramids. Like other worlds, there are a variety of other themed Zones; as for the Wii U/PC version, there is a candy-themed Zone and honey hive-themed Zone.

In the Nintendo 3DS version of Sonic Lost World, the player can find Yellow Material in the Zones if they finish them successfully.

The first half of Zone 1 of Desert Ruins is takes place at a desert, only it appears to be much open-spaced and less ruin-like within the game. In this Zone, the Crimson Wisp appears, which gives Sonic the Crimson Eagle power, allowing him to fly over quicksand and avoid the giant Sandworms. The second half takes place inside a temple. Sonic has to avoid getting eaten by Sandworms.

Zone 2 of Desert Ruins features a 3D behind-the-back perspective as Sonic is running constantly. Throughout the level, Sonic runs through honeycombs, skydives while trying to avoid Balkiry Badniks, performs long Homing Attack chains on Galaga Bees, and dodge various obstacles such as iron balls. The final part has Sonic soaring through the air towards Zomom on front of a green and purple block-like face. Zomom will jump on the green face and rotate it ,and Sonic must make sure he doesn't fall off the rotating face. Zomom will become dizzy after this, and Sonic has the chance to defeat him. Zomom will also slam down on the face and send Sonic up in the air, where he must dodge iron balls. The hexagonal structure of the honeycomb tunnels resembles the layout of the Special Stages from the Sega 32X video game Knuckles' Chaotix.

Zone 3 of Desert Ruins has a candy theme to the level, similar to Sweet Mountain from Sonic Colors. Sonic can run on multiple platforms of a variety of foods, such as licorice, and pieces from both cake and cookies. Several foods can be seen in the background, such as cupcakes, pancakes, and ice cream. Sonic can also use a Homing Attack to jump higher via Truffle Cannons.

Zone 4 of Desert Ruins is a 2D platforming Zone where the camera will automatically scroll to the right. In this Zone, Sonic must stay ahead of a giant tornado or he will lose a life should he get caught in it. In the second half, Sonic will be able to use the Yellow Drill Color Power and then continue running away from the tornado until he encounters and fights Zomom for the second time in this game.

Much similar to Zone 1 on the Wii U version, Zone 1 on the Nintendo 3DS version has Sonic going through a giant, desert area where bottomless pits and moving sand cause some difficulty for the player, who controls Sonic. Giant cacti and giant Sandworms, as well as Eggman's Badniks, appear in this stage to test the player's skills. The player has to look out for even more gigantic worms, which move on the underground, trying to catch Sonic. The Indigo Asteroid is introduced in this Zone.[2]

In Hard Mode, this level comes with an extra section just after the last giant Sandworm and before the Capsule, in which Sonic must slide along several pieces of quicksand above a bottomless pit while avoiding spherical cacti.

For the Nintendo 3DS version, Zone 2 of Desert Ruins has an entirely side-scrolling theme, featuring Sonic moving through, as the Zone name suggests, a set of ruins in a desert. There are gimmicks in the stage that determine whether Sonic should go through the right path or an alternate pathway. The Yellow Wisp and its Color Power, the Yellow Drill, are available to use in this stage, after being unlocked in Tropical Coast. Movement-spheres sense the movements of Sonic and can be used to activate switches Sonic cannot reach to move on throughout the stage.

Zone 3 of Desert Ruins starts with a maze of moving sand. Sonic must hit switches to open pathways. Then he must run into Zomom's boss vehicle, who shoots lasers at Sonic. After getting past the vehicle, Sonic must defeat some sandworms. After hitting a spring, Zomom's vehicle returns, this time blowing wind to hinder Sonic's progress on defeating Badniks. Once Sonic gets past Zomom's vehicle once again, he heads to the capsule. The Gray Wisp and its Color Power, the Gray Quake, are available to use after unlocking them in Silent Forest, allowing Sonic to break gray blocks.

The Extra Zone is only unlocked by collecting every Red Star Ring from Zones 1-3. It is very similar to Zone 1, even to the point of recycling some of its geometry, but with several added spiked balls and warp points. This level has a large emphasis on the Gray Quake, which is needed to progress, as well as to traverse the copious amounts of quicksand. 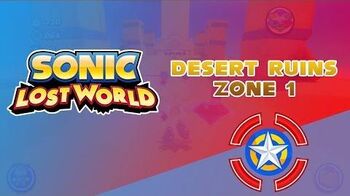 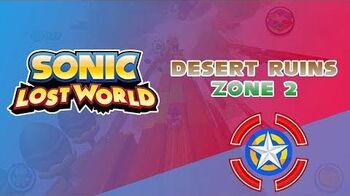 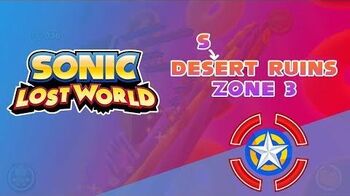 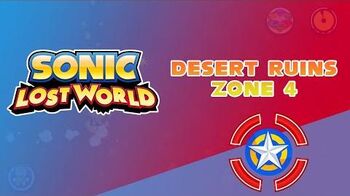 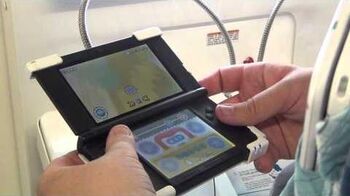 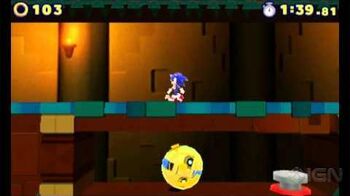