Concept image of Desert Dazzle, by Christian Whitehead, in the Sound Test, from the 2011 remaster of Sonic the Hedgehog CD.

Desert Dazzle was a scrapped Round that was intended to be included in the 2011 remaster of Sonic the Hedgehog CD.

Desert Dazzle is a large desert-like area with a multitude of cacti and cow skulls, though the latter are only featured on the sides of cliffs. The salt flats in the background are a bright, sandy yellow, contrasting nicely with the darker oranges and browns that make up the cliffs in the foreground.

Desert Dazzle was coined by the head developer for the 2011 remaster of Sonic the Hedgehog CD, Christian Whitehead, who posted the information about the Round. According to Whitehead, the Round was cut so that the game didn't stray too far from its original form. However, an image of it is still featured in-game.[2]

It was revealed that the Sonic the Hedgehog CD levels were sorted in a folder and went through R1 (Palmtree Panic) to R8 (Metallic Madness). However, R2 was scrapped and R1 went straight to R3. Desert Dazzle was confirmed to be the replacement for R2.[3] 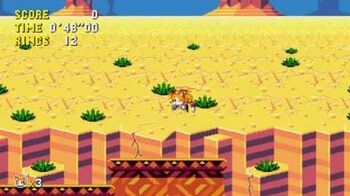