View source
watch 02:56
Raise a Floppa - The Loop
Do you like this video?
Play Sound
Main page GalleryTranscript

"Depths of Danger" is the sixteenth episode of the anime series, Sonic X. It first aired on 20 July 2003 and 17 January 2004 in Japan and the United States respectively.

The President demands the search of the notorious Dr. Eggman who is hiding underwater inside the damaged Egg Fort. Down there, Eggman is seen holding onto Decoe and Bocoe, trying not to make a single sound, warning them that if they are heard, they are done for. After the search, Eggman orders Decoe and Bocoe to repair the Egg Fort. Back at the Thorndyke mansion, while Chris and his friends are enjoying a meal, Chuck hands out passports and other official documents issued by the government to Sonic and his friends (much to the dismay of the latter; Tails receives multiple licenses just so he could fly anywhere on his aircraft and Amy's picture in her passport was not favourable). Meanwhile, Sonic and company flew over to the Southern Sapphire Sea for a well-deserved vacation. While riding to the sea by the X-Tornado, Tails finds out that another Chaos Emerald is near them, but it is located underwater. Upon landing, they head into town and walk through a crowd of civilians. Despite trying not to draw attention to themselves, the crowd immediately notices them and chases them, hoping to get Sonic’s autograph.

After losing the crowd, Tails and Amy are tired of being stared at and chased by crowds; saying that being famous is not any fun. Cream then points out that Sonic is not with them. Amy and Cream have a swim while Tails rests by a rock; during this time Chris eventually finds Sonic who wonders how he can get to the bottom of the ocean to search for the Chaos Emerald. Chris discovers he might have some ideas on how to do this. As his first idea, Chris tells Sonic to breathe through a long hose and as Sonic walks along the sea floor, Chris holds out the other end in the air. However, the hose holder drops into the ocean, causing Sonic to get stuck. Things got worse when a crab comes by, cuts the hose and clamps Sonic as he manages to surface out of the water. Next, Chris returns with a large, diving bell. Sonic is then walking along the sea floor with a large bell. Although Sonic prefers this over breathing through a hose, he encounters a new problem that he cannot see where he is going. Unfortunately, he trips over a rock, causing the bell to trap himself inside.

After Chris manages to rescue Sonic back to dry land again, the gang heads towards a shop to purchase equipment necessary for diving. The owner of the shop says that the items are for free due to the government paying tax for Sonic and his friends' official residence and then tells them a legend that a ship sank along with treasure a long time ago. Sonic, Tails, Amy, Cream, and Chris dived underwater in hopes of searching for the treasure the diving shop manager speaks of as well as the Chaos Emerald they have detected earlier. Meanwhile, Decoe and Bocoe finally finished repairing the Egg Fort, much to their dismay that the repairs took place underwater. Eggman then gets mad at Sonic seeing them on TV that they are having a vacation. Not long though, Eggman decides to rest outside in the sun in attempt for a vacation. He orders his messenger robot, Bokkun to deliver a message to Sonic and his friends. When the robot arrived to the heroes' boat, he doesn't see anyone there apart from Cheese sleeping on the boat. Disappointed, he flies back to the Egg Fort and plays the message at a relaxing Dr. Eggman with Decoe and Bocoe. When the doctor questions why the message is played at him and not at the heroes, Bokkun responds that no one is at the boat apart from Cheese. After the message finishes playing, it explodes right in front of Eggman, Decoe and Bocoe, much to the doctor's disgrace.

Clurken has the upper hand due to the drag of water limiting Sonic's running speed while in underwater. The robot manages to trap the hedgehog in its tentacles while taking the fight up in the surface. However, Sam Speed arrives into the scene riding on a jetski tossing the handle to Sonic. Tails gives Sonic a Ring and Sonic destroys Clurken, but the Egg Fort escapes. Mr. Tanaka arrives in a boat to rescue the gang. While they returned to the diving shop, they told the shop manager that they discovered the sunken ship and its treasure but because of Eggman, it is now buried beneath the sea rocks. Despite of this, the shop manager is glad to hear that the legend is actually true. As Sonic and his friends continue their vacation, Chris tells Sonic and his friends that the shop owner's grandfather is actually the captain of the sunken ship as the episode draws to a close. 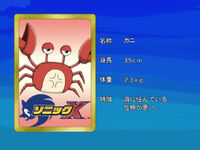 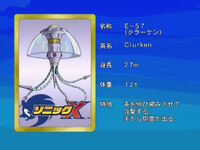