"Defective Detectives" is the thirty-ninth episode of the anime series, Sonic X as well as the first episode in the Egg Moon Saga. It first aired on 28 December 2003 and 11 December 2004 in Japan and the United States respectively.

Some parts of Sonic's world and some creatures called Flickies start to appear. The President knows they are from Sonic's world so he asks Chuck and he agrees to this. Chris seemed worried in that scene.

Rouge and Knuckles are in the roof of a building and she makes fun of him. Knuckles quotes that one minute the humans love them because they are unique and the next they want them jailed because they are different. Rouge teased him at this. Knuckles was embarrassed and calls her "batty".

Later that night Chris asked Chuck about what happened earlier before heading home. Chris was worried that his fellow humans might take Sonic away.

Vector and Espio were inside their office. Vector complained that Charmy was late. Espio seemed to be in a bad mood and tells him that they have more important things to worry about. He wondered where they were while Vector was puzzled as to why half of the moon was missing. Charmy arrives carrying a newspaper, lands on Vector's nose and tries to show him the newspaper. Vector ignores it and tells him to get off his nose. Espio asked Charmy where they were, but Charmy didn't know, shocking his teammate. Vector reads the newspaper seeing Sonic save the day, surprising him. Espio tells them they will be famous. They introduce themselves at the camera except for Charmy.

Meanwhile at Eggman's ruined base, a rocket is launched from it. The President ordered his force to find out where it's headed. Eggman makes a speech that apologizes for Space Colony ARK event and repairs the moon in ten minutes, making an interlocking steel bar surface. Tails, Cream and the others see this from the TV, as does Sonic with his own eyes.

The next day the Chaotix decides to solve the case after some talking about learning to be a detective which Charmy agrees. They go to the Thorndyke residence hiding behind one of the hedges and find Cream inside talking to her friends. Charmy states that Vector located the manor with a map of stars' homes. The leader of the team laughs of the fact that Sonic hangs around with movie stars. Charmy calls him jealous of Sonic because the hedgehog hangs around with movie women. Vector gives first evidence of the case objective by saying they 'have a damsel in distress to rescue'. Vector know the house is guarded and Espio asked how to get in. Charmy suddenly hands Vector the telescope showing Ella, calling her a 'big, scary' security guard. They hide in the hedge when Ella nearly sees them.

Meanwhile Sonic was running in a field and runs into Eggman, who was watching the city.

Back at the Thorndyke residence, Espio uses his Camouflage to sneak in unnoticed around and into the house. Amy was getting impatient inside and asked where Sonic is. Sonic told her that he would back at noon sharp. Tails tells her that he must have lost track of time. Amy swings her Piko Piko Hammer, telling them it's 'the last time he keeps me waiting' and accidentally hits Espio who is beside her, sending him out into the tree and onto the ground. Vector and Charmy was shocked to see this and asked Espio if he is okay. He replied 'I think so' and 'she sure can swing her mean mallet'. Charmy was upset at this and Vector decides to fight them.

Sonic and Eggman are talking while looking at the city when they are interrupted by someone who unexpectedly arrives, shocking Sonic.

Vector and Charmy confront Tails and the others. Tails asked what they want. Chris asked him if he knows Vector and Charmy and he replies that he never seen them before. Vector tells them to quit stalling and hand over Cream and Cheese to him or else and Charmy repeats 'Or else'. Cream asked them where are they taking her and Cheese. Ella tells her 'you don't think they have to take you' and she tells her she's only asking. Vector notices Ella calling her a bodyguard monster and grabs Charmy ready to sting them. Vector and Charmy fight them. Then Sonic arrives wondering what's going on. Tails yells at him to help them - they are being attacked. Vector pushes Tails down, notices him and calls Sonic a kidnapper. Sonic shouts to Vector that he's 'no kidnapper' when the stranger steps in. Vector recognized her with awe. It turn out to be the stranger who was with Sonic and Eggman earlier and Vector's client was other than Vanilla - Cream's mother. She thanks and says it was nice to see Vector and Charmy. Sonic calls to Cream. Cream turns around, surprised. Her mother was happy to find her baby all right. Cream tearfully reunites to her mother and the others smile at that. Chris was surprised to see Cream's mother. Vanilla thanks Vector and Sonic for watching Cream. Sonic tells Vector who thinks Sonic is a kidnapper and Vector was surprised at that. Eggman was in his Egg Mobile watching them, unimpressed and leaves. While Cream introduces her mother to Chris and the others except Espio, who was still in the bushes laying dazed with a lump on his head yelling for help. 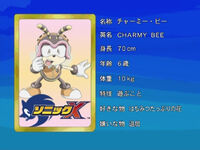 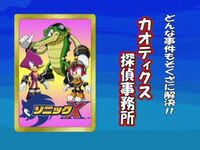 Chaotix
Add a photo to this gallery