Sonic News Network
Register
Don't have an account?
Sign In
Advertisement
in: Sonic and the Black Knight stages, Forest theme

A deciduous forest full of dangers

Western region of the Grand Kingdom

Deep Woods (ディープ・ウッズ, Dīpu Uzzu?) is the third area of Sonic and the Black Knight. Deep Woods is also the home to Nimue and where Sir Lancelot awaits Sonic.

Storm clouds gather in the sky as the pastoral farmlands outside Camelot Castle give way to a sprawling woodland of old-growth trees and spiked vines. The forest is inhabited, though, with the Arthurian folk residing in several walled villages within the confines of the forest (and they plant an inordinate quantity of bear traps between the trees). Marshes, ponds, and gorges make the Deep Woods a varied environment for any adventurer.

With Caliburn successfully sharpened by the Blacksmith, Sonic and the sword press on with their main quest for Merlina the Wizard: finding Nimue to learn how to counteract the Scabbard of Excalibur and thus curtail King Arthur's immortality. Accordingly, they proceed from Castle Camelot to the Lady's home in Deep Woods.

After cutting a path through the underworld legions in the forest, the hedgehog encounters Sir Lancelot, the strongest of King Arthur's Knights of the Round Table who challenged him to a fight. Sonic manages to defeat the Knight of the Lake in battle but according to Caliburn, the victory only came through mere luck.

Finally, the hedgehog arrives at Nimue's enchanted lake, only to find that Nimue is this world's doppelgänger of Amy Rose. Sonic initially hesitates to run off but after Caliburn orders Sonic to remain respectful, Nimue agrees to tell Sonic how to negate the Scabbard's power if he can prove himself as a true and noble knight, by completing three quests for her:

Nimue sets Sonic a time limit of three days. Wasting no time, the Blue Blur races back to Castle Camelot to orchestrate a medieval prison break.

Items which can be acquired in the Dark Woods missions include: 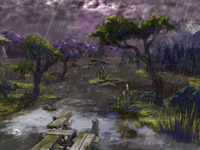