When even deeper wellsprings of grief and anger in the world's people gather, they give rise to these mean monsters. They're both stronger and tougher to take out than their Nightmare cousins.

The Deep Nightmare (ディープ・ナイトメア, Dīpu Naitomea?) is an enemy that appears in the nighttime Stages in Sonic Unleashed. They are a variant of Dark Gaia's Minions and a powered-up version of the Nightmare.

The Deep Nightmares look much like the regular Nightmare, resembling humanoid chameleons with thick forearms and having purple smoke emitting from their back, but they have some distinguishing traits as well. They are slightly taller and their horns and tails are larger and more jagged. They also have several more teeth with tusks in the corner of their mouth, and they have a greater number of spikes on their back (which are larger than those of the regular Nightmare). Additionally, their skin is colored a darker blue, and their markings glow in a darker electric crimson.

The Deep Nightmares and the rest of Dark Gaia's Minions came into being when Dark Gaia broke apart at the beginning of Sonic Unleashed due to its premature awakening by Dr. Eggman. These fragments were then spread across the earth and became Dark Gaia's Minions, with the Deep Nightmares amongst them. Specifically, a Deep Nightmare is created from the deeper wellsprings of people's grief and anger.[1] They first appear in Windmill Isle Night Act III: Hill Beneath Starry Skies in the Wii/PlayStation 2 version and Windmill Isle Night Act 1 in the Xbox 360/PlayStation 3 version.

The Deep Nightmares have much faster movements, can deal more damage, have more health and are more tactical than the regular Nightmare. Unlike the normal Nightmare, the Deep Nightmares can appear alone or spearheading lesser members of their kind. They also come in a stronger variant called Red Deep Nightmares.

In battle, the Deep Nightmare fights with hand-to-hand combat, but in a more aggressive way than the Nightmare. They usually strike with their stretchy arms and can perform body flips that cause damage to Sonic if hit. They are also capable of aerial attacks; if Sonic jumps into the air, the Deep Nightmares can jump up and knock him down again. In the Xbox 360/PlayStation 3 version, they have a move similar to the Were-Tornado and Were-Cyclone, though they will shrink down from exhaustion and be vulnerable after using this move. When fighting defensively, they can nullify the damage from the player's attacks by guarding (which can be broken with the right combo attack or be automatically lowered after a while) or jumping backward to dodge strikes. As the player advances, the Deep Nightmares will become faster, stronger and more refined defensively.

Upon the reconstruction of Dark Gaia by Dr. Eggman, all of the Deep Nightmares (along with the other types of Dark Gaia's Minions) were returned to the beast, who was later defeated and sealed within the planet's core.

The Deep Nightmares are able to move around by teleporting into an area in a puff of purple smoke, or emerging from black puddles on the ground. As a Dark Gaia Minion, the Deep Nightmares can possess people by latching onto the deepest, darkest part of the heart, and generate despair, negative emotions or even erratic behavior that are completely opposite to the person's personality.

Being an evolved form of the Nightmare, the Deep Nightmare have strength, speed, durability and intelligence above the regular Nightmare.[1] They possess elastic bodies, allowing them to stretch their limbs over a slightly larger area. They can even enlarge their limbs and amplify the power of their physical strikes with dark energies, although doing so exhaust them and leave them weak and vulnerable afterward for a few moments.

The Deep Nightmares have a certain degree of skill and cunning in terms of hand-to-hand combat, being able to fight opponents with combos and guard against attacks with their arms. They can also use the spines on their backs as melee weapons. 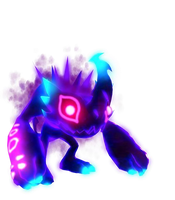