I can't wait to see how long you last against this.

The Death Queen[1] is a character that appears in Sonic Forces. It is a queen bee-based battlemech created by Dr. Eggman that is used by the Eggman Empire.

The Death Queen is a colossal bee-based robot that bears a striking resemblance to the Buzz Bomber. It has a black head with four red eyes, a small mouth, a pair of orange spikes on its forehead for horns, and a white collar around its neck. It also has an orange thorax with six orange and black legs with red claws, an orange and black-striped abdomen with four engines attached to it, and a massive black stinger. On its back it has two pairs of yellow insect wings.

The Death Queen is capable of flight using its wings and engines. It also possesses a stinger which is sharp enough to pierce metal and can be surrounded in energy to amplify its attack range. It can also fire lasers from each of its six legs. 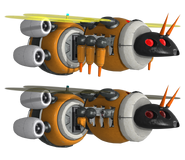