Sonic facing off against Mecha Sonic in Death Egg Zone, from Sonic the Hedgehog 2.

Death Egg Zone takes place onboard Dr. Robotnik's Death Egg in outer space. Most of the Zone's background, which shows a view of earth, is covered by an orange-brownish wall. The platforms here are light gray, decorated with some patterns and warning signs.

After Wing Fortress Zone's destruction and hitching a ride to space aboard Robotnik's fleeing rocket, Sonic makes his way inside the battle station, only to be greeted by Mecha Sonic while Dr. Robotnik watches from the background. After defeating the robot, Sonic chases down the scientist across the Death Egg, who flees to his new Death Egg Robot and the Doctor confronts Sonic.

Once the mech is taken down, the Death Egg begins to explode, but Sonic manages to survive by hurling himself out of an airlock into space. Looking like the end for Sonic as he descends through the stratosphere of his world, Tails appears and catches Sonic on the Tornado, thus ending the game, but if the player has all seven Chaos Emeralds, Sonic instead safely flies beside the Tornado as Super Sonic.

Death Egg Zone does not feature any notable hazards or Rings.

Death Egg Zone starts in a short corridor followed by a giant room where the Mecha Sonic battle takes place. Next, there is a long corridor through which the player chases Dr. Robotnik, after which there is a giant room with the Death Egg Robot at the far right of it.

Mecha Sonic is perhaps the Sonic robot which bears the most resemblance to Sonic apart from being a little taller and has a silver-colored scheme. Mecha Sonic has many different attacks that are mostly similar to Sonic's, such as the turbo-dash and spin-jump. However, the most challenging move of Mecha Sonic's is his jump-and-spike-launch-attack. The best way of avoiding this is to kill the robot before he gets a chance to use it; spin dashing Mecha Sonic the moment his jet-boots touch the decking. Sonic can hit him 4 times in one bout if one times it right. Then accrue another 4 hits (for a total of 8) to the robot's head to defeat him.

Once Mecha Sonic is vanquished, Sonic enters a quick chase scene with Dr. Robotnik before he jumps into the final boss robot.

The Death Egg Robot is the second boss of the Zone as well as the final boss of the entire game. It begins to walk towards the player while moving its spiked hands back and forth. Afterwards, it flies offscreen into the air in an attempt to stomp on the player. After landing, it will then launch its arms like rockets. In addition, it can launch a pair of grenades which almost guarantee death should the player get behind the Death Egg Robot. The boss is defeated after twelve hits. 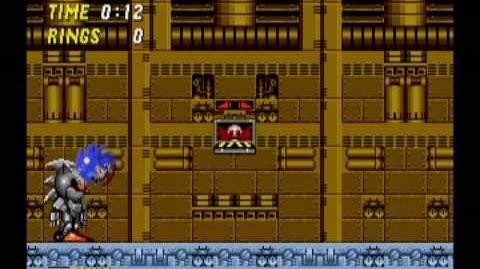