For other uses of this term, see Death Egg Robot (disambiguation).

Those are Death Egg Robots! They're being mass-produced now?!

The Death Egg Robot sentinels are designed after the original Death Egg Robot, but several times larger, being over three times the size of an apartment building. They have egg-shaped bodies with a narrow pelvis each, stubby and heavily armored legs, thin arms with cone-like forearms, thick gauntlets, cap-shaped shoulders attached to bars rather than sockets, three straight spikes for fingers and jet packs on their backs. They also have triangular markings on their chest (which are similar to those on Eggman's original jacket) and dome-shaped heads. Unlike the original robot though, the faces of the Death Egg Robot sentinels are almost blank, with the exception of a single red eye and a red field for a mouth. They are also completely gray and black with glowing red outlines.

Besides Frozen Junkyard, a Death Egg Robot sentinel also appears on the Dark Arsenal race track. This robot appears in the center of the track and is under construction. Under its arms are two Bumper-based trampolines that the player can use to take a shortcut. However, the player has to watch out for the burners that occasionally ignite under Death Egg Robot sentinel's arms, which can knock the racers into the abyss.

Due to their sheer size, the Death Egg Robot sentinels are incredibly strong and tough; one unit can easily topple buildings single-handed and withstand a barrage of shots from a number of laser artillery turrets being fired on it from various angles by Resistance forces.[1] They can also fire powerful lasers from their eyes.[3]

The Death Egg Robot sentinels' eye sensor are weak to direct hits, which Sonic and the Avatar exploited during their encounter with one of them at Red Gate Bridge.

In the Sonic the Hedgehog comic series and its spin-offs published by IDW Publishing, the Death Egg Robot sentinels are a mass-produced Super Badnik in service to the Eggman Empire.

Team Sonic Racing
Add a photo to this gallery 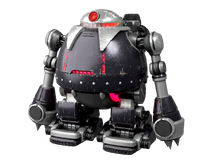 Sonic Forces
Add a photo to this gallery