Sonic News Network
Register
Don't have an account?
Sign In
Advertisement
in: Sonic the Hedgehog 4: Episode I bosses, Final bosses

Death Egg Robot in Sonic the Hedgehog 4: Episode I.

Upgraded Eggman-looking robot moves slowly, is able to fire its metallic arms and has multiple phases. Takes 24 hits to defeat.

In addition to using its old arsenal, Dr. Eggman will attack with a kamikaze dive for one last hurrah.

When the battle begins, the Death Egg Robot first repeats its pattern, as moving slowly, tries to fall down on player's neck and fire its arms. It does not include small bombs when the player is behind of it. It is, in essence, the same mech from Sonic the Hedgehog 2, but like the other bosses in the game, it shows new attack patterns after being heavily damaged.

After sixteen hits the Death Egg Robot becomes surrounded by electricity, making it impossible to damage directly. It also appears to malfunction, randomly leaping across the field both forward and backward, firing its rocket hands at a much faster pace. To damage the Death Egg Robot, Sonic must knock its severed arms back into it when one flies off and floats back down. This disables its electrical field long enough to strike its body. After about six hits, the Death Egg Robot starts shooting lasers at Sonic from a compartment in its head. There are two types of lasers, the first being pink bullets commonly used by many other enemies within the levels and second a powerful beam that shoots along the ground (this attack is absent from the iOS versions). 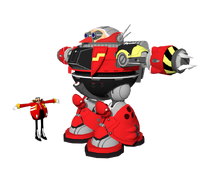