For other uses of this term, see Death Egg Robot (disambiguation).

The Death Egg Robot (デスエッグロボ, Desueggurobo?), originally known as Death Egg (デスエッグ[1], Desu Eggu?) and also known as the Eggman Mech,[2] is an object in the Sonic the Hedgehog series. It is a giant battle robot built by Dr. Eggman in his own image which has been used by the doctor on numerous occasions to battle Sonic the Hedgehog and his allies.

The first depiction of the original Death Egg Robot model showed it as a humanoid mech whose head and torso came together in an indistinguishable egg shape. Its head and torso bore a great resemblance to Dr. Eggman during his younger days, right down to his mustache and attire, but with a metallic grey scalp and a small antennas on the sides of its head. It also had yellow shoulders with red arrow marks on them, along with red and yellow arms with three spikes for fingers, a grey jetpack on the back, and thighs made of two grey spheres each. It also had large and armored red feet with kneecaps.

Modern depictions of the first Death Egg Robot model depict it as much taller than initially shown. While still similar to the original, its modern depiction has a sturdier chassis, what that appears to be wheels installed in the feet, round shoulders, and a black and grey jetpack consisting of two rectangular cylinders. The antennas seen on the head of the original are also absent and the forearms appear to have been redesigned to be much bulkier to allow for the rotary spikes on their ends. Its lower chassis is also smaller and its legs are shorter.

The Death Egg Robot that appeared onboard the E.G.G. Station Zone was similar to the first model, but with a noticeable paint job, such as more black details and Eggman Empire shoulder tattoos, to reflect the modern Eggman design. It also had almost stubby legs.

The Death Egg Robot that appeared at the Eggman Empire Fortress came in two forms. In its first form, the Death Egg Robot was a massive grey mech with some red here and there. It had a small dome-shaped head that could open up like an eye. It also had three spike-like appendages on top of it similar to a crown, a rounded body with a red energy core in the middle, four tentacles with three-clawed hands at the end of each one on its back, large shoulder pads with silver on its upper and lower arms and large fist with four fingers on both arms, and a very serpent-like lower body. In its second form, it was a three-headed core module mech with a large head in the middle, two smaller heads on the sides and smaller cord-like appendages below it, each with a single eye. It looked very much like the Nega-Wisp Armor, the only differences being that it was white and that it had eight long tentacles, six of which ended with three small three-clawed hands, and two of which ended with large eight-clawed hands that could open up.

The first Death Egg Robot model was a massive powerhouse but was incredibly slow. Its thick chassis made it highly resilient to attacks and it possessed a jetpack that made it capable of flight. It could also fire its hands as projectiles and guide them back to its arms to reattach them and deploy small bombs. Modern depictions also indicate that the first Death Egg Robot had telescopic arms, an articulated waist that let it rotate its torso 360 degrees, enough durability to be nearly impervious to attacks (even bombs could only stun it temporarily), and enough strength to jump and smash metal like paper despite its massive frame.

The second Death Egg Robot that appeared onboard the E.G.G. Station Zone had all the original model's abilities and more. In addition to being significantly faster and more durable than the original, this Death Egg Robot could generate an electrical field around itself that made it invulnerable. It could also fire lasers and energy blasts.

In Sonic the Hedgehog 4: Episode I, Dr. Eggman used an updated version of the Death Egg Robot to battle Sonic the Hedgehog after the hero had chased him to his E.G.G. Station. Although this Death Egg Robot proved a more formidable foe than last time, Sonic still managed to defeat Eggman and this mech suit, causing the entire E.G.G. Station to explode.

In Sonic Forces, Dr. Eggman made an alien-looking Death Egg Robot as his final trump card against the Resistance. This robot had the Phantom Ruby incorporated into it, allowing the gem to stay safe while the Resistance targeted what turned out to be a decoy.

Shortly after the decoy was destroyed, the Death Egg Robot made its appearance. Eggman viewed the machine, as well as himself, as the ultimate successor to Infinite, retaining all his abilities. Using his Phantom Ruby-empowered mech, Eggman began conjuring up thousands of replicas of Shadow, Metal Sonic, Zavok, Chaos, and Infinite. With this massive army and his remaining fleet, Eggman planned to wipe out the entire Resistance and perfect his rule over the world. Despite the odds however, Sonic the Hedgehog, Classic Sonic, and the Avatar completely destroyed the Death Egg Robot, wiping out the last of the replicas and returning peace to the world.

In the Sonic the Hedgehog manga published by Shogakukan, the Death Egg Robot (referred to as only the Death Egg) was a mech that Dr. Eggman once used to battle Sonic onboard his Death Egg station. However, it was easily destroyed by Sonic. Eggman later tried using a rebuilt version of it against Sonic (but forgot to add legs to it), only for Sonic to destroy and vandalize it.

In the Sonic the Hedgehog comic series and its spin-offs published by Archie Comics, the Death Egg Robot is referred to as the Egg Destroyer Battlesuit. During Operation: Clean Sweep, it was used by Dr. Eggman to battle Sonic. However, it got destroyed once Sonic transformed into Super Sonic.

After the Super Genesis Wave re-wrote history, the Egg Destroyer Battlesuit's past is now virtually identical to its game counterpart's.

In the Sonic the Hedgehog comic series and its spin-offs published by IDW Publishing, the Death Egg Robot is presented as one of the many Eggman mechs that Sonic has fought over the years. 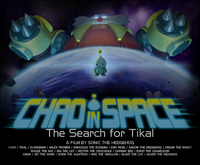 Death Egg Robot in a Chao in Space poster from Sonic Generations.
Add a photo to this gallery