I'll take that engine, old fool! And I'm going to use it in my monster machine to crush Sonic! Hoohoohoo!

The Death Egg, also referred to as the monster machine,[1] is a character that appears in the Sonic the Hedgehog series. It is a racecar/robot hybrid created by Dr. Eggman to crush Sonic the Hedgehog and powered by the Ultimate Energy Engine.

The Death Egg resembles a fusion of the mass-produced version of the Death Egg Robot and the Egg Booster vehicle, possessing the former's head and torso and the latter's undercarriage. Its Death Egg Robot part resembles a black egg with triangular markings on its chest (which are similar to those on Eggman's original jacket), red lines of light on its belly, and a gray dome-shaped head with a single red eye and a red field for a mouth. It also has the Death Egg Robot's black backpack and gray disk-shaped shoulders. Its Egg Booster parts on the other hand consist of four wheels that stick out from the Death Egg's sides. These wheels have yellow shock absorbers, black tires, and cyan-glowing hubcaps. Also, between each set of front and back wheels is a gray box with yellow and black hazard stripes. Also, covering the top of each side of the Death Egg, from the front wheel to the back wheel, is a narrow and black metal fender with cyan lights along the sides and cyan and red front lights. Lastly, the Death Egg has two gray flaps on its back with an exhaust underneath each of them.

After Dr. Eggman stole the Ultimate Energy Engine from Dodon Pa, the doctor incorporated the engine into his Death Egg, which he planned to crush Sonic with. The Death Egg was subsequently pitted against Sonic and his allies in a race on the Thunder Deck with Metal Sonic and Zavok backing it up on the racetrack. However, despite its best efforts, the Death Egg and its teammates lost to Sonic and his Speed Star. Angry, but not beaten, Eggman tried to launch another attack on Sonic with the Death Egg. However, the Death Egg had at that point gone crazy, causing it to head towards the Final Fortress' energy core. The Death Egg was soon after destroyed, along with the Ultimate Energy Engine and the Final Fortress when it crashed.

The Death Egg displays no sign of sentience or self awareness. However, given that it is able to competently race and cooperate with its teammates, it must possesses a limited artificial intelligence at least.

Due to its design, the Death Egg possesses all the abilities and powers of a racecar, including outstanding acceleration, enhanced reflexes, top racing speed, and nearly limitless stamina. 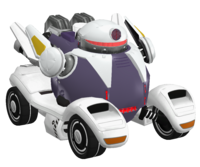