A power plant set in a dangerous space station.

Hey, the defense system's still up! I thought we shut it down.
They probably switched over to auxiliary power. Not to worry. Sonic is on the job. He'll find a way through!

Death Egg (デスエッグ, Desueggu?) is the twenty-second stage in Sonic Forces, and the sixth stage in the game to be played as Classic Sonic. This stage is a re-imagining of the Death Egg Zone from Sonic & Knuckles on the Sega Mega Drive.

Located onboard the Death Egg, this stage is set close to the space station's power generator. During the events of the game, Classic Sonic came here to destroy the Death Egg, and, by extension, the Phantom Ruby.

The stage takes place inside the metallic Death Egg. Set inside some kind of facility, the stage leads through dimly-lit halls of colossal sizes and narrow corridors. The stage is pretty high-tech as well, with marvels and components like cables, superheated surfaces, laser cannons, pipes and triangular light panels (which are arranged in hexagons) adorning the surfaces. In addition, there are a couple of pillars in the background with Red Eyes in them that survey their designated areas.

For the majority of the stage, one can see a factory of some kind in the background. Here, yellow-eyed orbs get carried around by different devices, such as rails, lifts, conveyors belts powered by giant gears, and grabbing claws. Also, at the end of the stage, one can spot the Death Egg's power generator in the background. This unit is a massive orb with rings spinning around it. It is also below this generator that the orbs from earlier get deposited from the walls.

With the Death Egg's weapons system shut down by Sonic from the Chemical Plant's Network Terminal, Classic Sonic gets ready to board the Death Egg so he can destroy it and cut off the power supply powering the Eggman Empire's Phantom Ruby and Phantom Ruby prototypes.

Between Tails' optimism and Vector's skepticism about the success rate of this mission, Classic Sonic gets onboard the Death Egg, only to discover that its defense systems are still online, much to the surprise of Knuckles. Figuring that the Death Egg's crew have switched over to auxiliary power after discovering the main power had been deactivated, Tails is certain that Classic Sonic can handle this nonetheless. Along the way, the Death Egg's shifting gravity makes Vector feel disorientated. Regardless, Classic Sonic manages to cause such a ruckus that the Death Egg begins to crumble. With that in mind, Classic Sonic escapes the Death Egg before it explodes. While the Resistance celebrates this victory, Dr. Eggman retreats to Metropolis with Infinite to prepare their next move.

The main gimmick of Death Egg is the Conveyor Belts. Among the Conveyor Belts found in this stage, some of them will move along a certain path, creating a platform the player must stay on at all costs until it reaches its destination. Stationary Egg Pawns may also stand on Conveyor Belts to make traversing them more dangerous. Other local gimmicks include glowing panels that change positions when Classic Sonic steps on them, and the Ring Shooters (which are deployed three seconds after touching them). There are also the important particle-lined surfaces that blink in and out of existence in intervals, which can be used as solid platforms or bridges. In addition, there are some stage sections with shifts in gravity that cause Classic Sonic to walk on the ceiling.

Obstacles encountered exclusively in Death Egg are red-hot glowing panels. These panels can be set on the walls, ceiling or floor, and touching them will cause Classic Sonic to take damage. However, they will also destroy any enemy that makes contact with them. There are also laser cannons on the walls that charge up for a few seconds before firing horizontal-moving laser blasts that inflict damage upon contact.

Being a Classic Sonic stage, Death Egg is played entirely from a 2.5D perspective, and include Item Boxes for Classic Sonic to utilize. In addition, there are invisible Springs that only show themselves when the player steps on them.

At the beginning of the stage, keep following the path on the right until Classic Sonic arrives at a fork in the path created by Photon Bridges. From there, the player can take a multitude of branching paths; some will connect with different paths while others will take the player down drastically different routes. Regardless, all of these paths will eventually merge on the stretch leading of road leading up to the stage's first Ring Shooter. At this point, the route will branch off into multiple paths again, although they will soon all re-merge so that the player will be deposited on the final stretch of the stage by the third Ring Shooter they use. On this final stretch, the player must cross an extra long Conveyor Belt ridden with enemies in order to reach the Goal Plate. Luckily, there is an Invincibility Item Box before it so making it past the final Egg Pawns will be much easier. 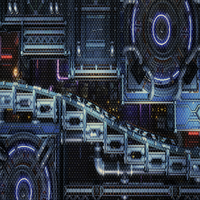