Death Egg's Eye is the ninth arena in Sonic the Fighters. It is the "Final Stage" and thus features the game's only boss battle: Metal Sonic. The level is an arena located inside the Death Egg II's eye.

The level is located inside the Death Egg II, but the arena itself is surrounded by a cage. Metal Sonic is the opponent for this level. Once you have defeated him, the arena will become an elevator and lower, and you will be taken down into the next level, which is the fight against Dr. Robotnik. 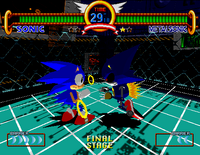 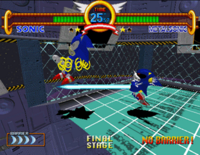