Knuckles in Death Chamber, from the 2012 remaster of Sonic Adventure 2.

The interior of Eggman's pyramid base.

Inside Eggman's pyramid base.

This stage takes place deep within Dr. Eggman's pyramid base, filled with bonfires, Badniks, and a large machine in the center.

After locating the entrance to Dr. Eggman's pyramid base, Sonic and co. find that the door to a shuttle that will take them to the Space Colony ARK, is locked. Sonic persuades Knuckles to find the three keys to the door so they may proceed.

This level, like some others in the game, has a large number of ghost-based enemies in it. It features many timed doors which can be temporarily opened by flipping an Hourglass. There are also paintings which Knuckles can Dig through.

Simplistic maps can be found on some of the walls, and depict the various sections of the stage in the same colors those locations are actually tinted. The player's current location is denoted by a glowing white dot.

The primary goal of this level is slightly different from Knuckles' other stages. Instead of finding Master Emerald shards, he is looking for three Keys. King Boom Boo is the boss following this stage, and the Egg Golem is faced by Sonic immediately after that.

After grabbing the six Rings in front of Knuckles at the beginning, the player should head for the blue section of the stage. They can play the Mystic Melody at the Ancient Ruin to make fourteen Rings appear. From there, they should keep traveling toward the blue section, where a Magnetic Shield will be in the room just after the metallic hallway. By arming Knuckles with this power-up, collecting the remainder of the Rings will be much easier.

The player should play the Mystic Melody atop the Ancient Ruin on the floor of the Pyramid Core and then dive into the water when the hatch opens. As they swim down, they should see a closed door. They must swim to the other side of the room and find the Hourglass, flip it, then quickly go through the door before it closes. Once the player has made it through, they should swim across one hallway where two robots are firing, then another hallway lined with Boos. Once they enter the large cavern, they should swim up almost immediately to emerge from the water.

The player should climb out to see an Hourglass in the alcove above. This opens the door directly above it, and behind that door is the lost Chao. The player will not be able to Climb straight up to the door, so they must hit the Hourglass and work their way upwards before the door closes.

This stage can be a bit confusing due to its layout, so the player should not be afraid to use a Hint Box for hints.

The three Keys needed to complete this stage are found in pre-set locations, and are as follows:

The Level Up Item in the Death Chamber is the Hammer Gloves. These allow Knuckles to break open Steel Containers. This Level Up Item can be found in a hall off from the first room, behind a wall of Wooden Containers.

In Death Chamber, Big is normally seen beyond the grating of E-01, from the red room's exit position. In the Hard Mode version of the stage, he has been moved slightly to the left from his previous position and downward. 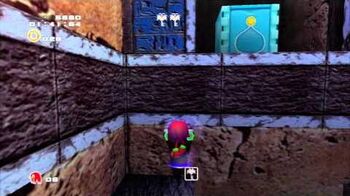 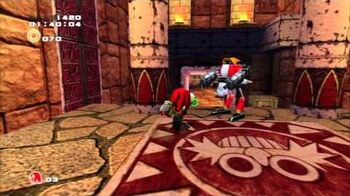 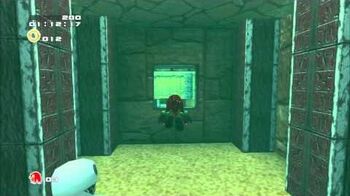 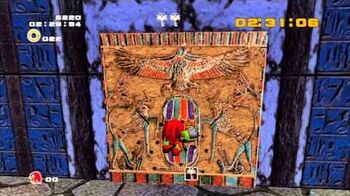 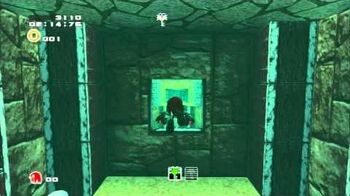