Darkspine Sonic, from Sonic and the Secret Rings.

The World Rings of rage, sadness, and hatred

If this is your world, then it's a world that I don't want any part of!

Darkspine Sonic[2] (ダークスパインソニック, Dākusupain Sonikku?), or just Darkspine for short, is a transformation that appears in the Sonic the Hedgehog series. It is the form Sonic the Hedgehog can achieve by absorbing the World Rings of rage, sadness and hatred. In this form, Sonic is slightly more violent and aggressive due to the influence of the World Rings' sealed feelings. During the decisive battle with Erazor Djinn, Sonic unwillingly assumed this form and defeated Alf Layla wa-Layla, thus saving the world of the Arabian Nights.

In this form, Sonic's fur and arms become a deep indigo color, and his skin turns pale white. He also gains a single, thick white stripe around his feet, and around his arms (close to where his elbows are), as well as a pair of much thinner white stripes that go up his forehead and down his upper middle quill, and a secondary pair of stripes on his lower middle quill. In addition, Sonic's pupils and irises disappear entirely. His eyes also become slightly more angular in shape, and his quills hang lower than usual. In terms of attire, Sonic loses his trademark gloves and shoes and instead gains four glowing golden rings around his wrists and ankles. His voice also undergoes a slight change: becoming much gruffer, but maintaining its normal pitch. He is also constantly enveloped in a large, flaming, orange aura.

In this game, Darkspine Sonic is only playable during the "Last Chapter" Mission in Night Palace. When beginning the fight, Darkspine Sonic will have zero Rings in his possession, although the player can pick up Rings throughout the Mission. In exchange, Sonic can maintain this form without sustainment from the Rings in his possession, and his Ring count will not be decreasing over time like Super Sonic's.

In Sonic and the Black Knight, Darkspine Sonic makes a cameo appearance on one of the fan arts posted in the game.

In Mario & Sonic at the London 2012 Olympic Games, Darkspine Sonic is mentioned as a part of some of the questions in Shy Guy's quiz minigames during London Party Mode.

In this form, Sonic possesses enough power to overwhelm even Alf Layla wa-Layla, despite the latter possessing a supposedly superior power source.

As Darkspine Sonic, Sonic has increased physical strength, enough to send Alf Layla wa-Layla's strongest attack back at him with brute force alone. He also possesses the power of flight, increased speed, and the ability to manipulate three elements in total, namely flame, darkness and wind.[1] His pyrokinetic abilities in particular allow him to create and control fire. In combat, he can create concentrated flames on his hands and feet to create destructive force behind his attacks and form miniature, yet powerful explosions of flames.

Darkspine Sonic has also demonstrated a profound and brutal form of hand-to-hand combat, being capable of delivering powerful kicks and punches in rapid succession. He is also able to perform Time Break and Speed Break without relying on the magic of Shahra's Ring, and he can generate the necessary amount of soul energy he needs for these moves, himself.

Being infused with some of the World Rings' power, which are what keep the world of the Arabian Nights together, Darkspine Sonic can warp the reality of the world of the Arabian Nights to a degree: with one gesture, Sonic could revert Erazor Djinn's realm back to normal while also expelling the World Rings' power from his body.

"We've got to... stop him! Shahra... Please! Lend me your... POWER!"
—Darkspine Sonic before the final battle, Sonic and the Secret Rings

"HA! How's this for an introduction then?"
—Darkspine Sonic deflecting Alf Layla wa-Layla's Spirit Blast, Sonic and the Secret Rings 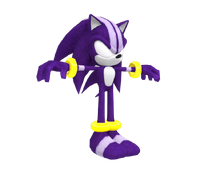