The Dark Queen, from Sonic and the Black Knight

Queen of the Underworld[1]

You would not understand, nor could you understand. That's why I must do what I must do. I am finished with you.

The Dark Queen (黄泉の女王, Yomi no Joō?, lit. "Queen of the Underworld"), also called the Queen of the Underworld,[1] is the final boss of Sonic and the Black Knight. It is a transformation of Merlina the Wizard, achieved through the power of scabbard of Excalibur. Merlina assumed this form when she tried to make her kingdom everlasting by applying the scabbard of Excalibur's immortality-granting magic to the world of Camelot, but she was stopped by Excalibur Sonic and Excalibur before she could destroy her world.

In her standard form as the Dark Queen, Merlina appears as a darker version of her regular self. Her long magenta hair has turned violet-blue and hangs loose and voluminous behind her back with a large and detailed red hairclip adorning it. Her skin has also turned pale purple, her eyes have turned amber-yellow, and below her left eye, she has gained a tattoo composed of two curved violet-blue lines.

In battle as the Dark Queen, Merlina can assume the appearance of a giant ghostly version of King Arthur. This spectral form of King Arthur, while sharing many of his characteristics, is colored completely black with an aura of blue flames, is equipped with an eye on its chest, has four arms, whereas two of the arms are connected at the hips, a cloth-like tail and no legs. On the back of this form, Merlina has dozens of cape-like energy strips floating, and a large circle composed of medieval symbols at the top of her back. In her two lower arms, she has two copies of Deathcalibur, and in her two upper arms she has two short orb-like wands.

The Dark Queen is essentially Merlina after she betrayed Sonic. With the scabbard of Excalibur, Merlina called upon the forces of the underworld to spread the scabbard's immortality-granting magic to the entire kingdom, and she assumed her Dark Queen form in the process. Using her High Ancient Magic, the Dark Queen created the Dark Hollow and began enveloping the kingdom in the underworld's forces.

Eventually, the Dark Queen was confronted by Sonic and Caliburn in the Dark Hollow. As Sonic questioned her actions, the Dark Queen calmly replied that the kingdom would end one way or another and began to solemnly tell about its grim future. Not willing to let this future come to pass despite her grandfather's efforts, the Dark Queen desired to make the kingdom eternal with the scabbard, but Sonic refused a world without an end and attacked her.

The Dark Queen easily repelled Sonic, before deciding to kill him with her shadow, cleaving and seemingly destroyed Caliburn in the process. Despite beating Sonic to an inch of his life, the hedgehog continued to attack her in vain. Suddenly, however, Sonic received the remaining sacred swords from the Knights of the Round Table, transforming him and Caliburn into Excalibur Sonic and Excalibur. In response, the Dark Queen transformed into a giant ghostly version of King Arthur and confronted the duo. Eventually, however, she was worn down and was dealt the final blow. With her defeat, the Dark Queen reverted back to a normal Merlina, who was then redeemed when Sonic convinced her to live her life to the fullest in their time they had.

In Sonic Runners, the Dark Queen appears as a S Rare Power Type Buddy. In gameplay, the Dark Queen can produce an item for every X Combo the player achieves. She can be obtained by being promoted in Timed Mode's Runners' League.

As the Dark Queen, Merlina's High Ancient Magic has been vastly increased and she can control the forces of the underworld to further augment her strength and influence. In this state, she is so powerful that she can beat back opponents like Sonic the Hedgehog, who at the time possessed Caliburn and had advanced swordsmanship skills in addition to his normal abilities, without any effort.

The Dark Queen possesses impressive senses and reflexes, being able to keep track of Sonic's movements and react according to them.

With her magic, the Dark Queen is capable of conjuring up impenetrable barriers that can repel enemies with extreme force, levitation and teleporting objects. She is also able to call forth a physical manifestation of her own shadow in the shape of King Arthur that she can control at will, which has enough physical strength to cleave through Caliburn's blade and heavily injure Sonic, and has fast enough movements to strike even Sonic.

Due to possessing the scabbard of Excalibur, the Dark Queen can as well bestow immortality to anything she desires, making the object in question immortal and everlasting.

The Dark Queen can also transform herself into a gigantic spectral and demonic version of King Arthur. In this form, the Dark Queen possesses enough strength to fight on par with Excalibur Sonic, and has enough physical durability to withstand several sword slashes from Excalibur, the greatest of all sacred swords. She can also, in this form, call upon her magic to form temporarily barriers to protect herself, though they can be broken by Excalibur Sonic's attacks, and project energy balls. She has also demonstrated efficient swordsmanship in this form, being able to dual-wield two large Deathcalibur-like swords at once and use them effectively in combat.

The Dark Queen's spectral form during the final battle.

The final fight of the game takes place in a dark dimension, where the player has to gain enough Soul Gauge power and do multiple slashes to the Dark Queen to make her dissolve.

At the beginning of the battle, the Dark Queen will summon an invisible wall which can only be broken through if Excalibur Sonic deals enough blows to it or enough energy balls are launched. Once the wall is broken, the Dark Queen starts firing multiple energy balls in strings which can either be dodged right by pressing

or left by pressing

. Alternatively, the player can deflect them with attacks. Once the Dark Queen's energy ball onslaught is finished, she will attack Excalibur Sonic in the same way King Arthur attacks Sonic with his sword. Likewise, Excalibur Sonic must block each blow by swinging the Wii Remote at the right time. When launching one attack however, the Dark Queen may do an unexpected sword trust with her other arm. Excalibur Sonic must counter her sword strikes multiple times to fill the Soul Gauge in order to attack with Excalibur Sonic's Soul Surge. After dealing enough damage, the Dark Queen will turn black and inflamed, which will make her attacks more random. After dealing enough damage to her from this point, a small in-game cutscene will appear and the battle will be over.

By attacking the Dark Queen at the right time during the Soul Surge will replenish the Soul Gauge slightly, thus extending the duration of Excalibur Sonic's Soul Surge and shortening the length of the battle. 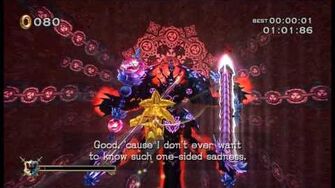