Dark Gaia’s sinister influence joined with the freezing climate of the Holoska tundra to form this beast.

Dark Moray (ダーク・モーレイ, Dāku Mōrei?) is a character that appears in the Sonic the Hedgehog series. It was one of Dark Gaia's Minions. After Dark Gaia broke apart in the beginning of the game, its energy fragments were scattered across the globe. In Holoska, these energies combined with the continent's cold climate to create Dark Moray, who became the guardian of Holoska's Gaia Temple.

Dark Moray resembles a combination of an eel and an eastern dragon. It has a very large mouth with thin, sharp teeth, though its jaw is a bit crooked. It has two sets of horns on his head; one set of more curved and split horns around his jaw joints and a set of more straight horns on his forehead. It also has a green abscess on its lower belly area, its upper back and on its forehead, which might act as central arteries. In the Xbox 360/PlayStation 3 version, it has blue skin, while in the Wii/PlayStation 2 version, it has black skin with swirly red markings all over his body and cyan outlines.

In the Xbox 360/PlayStation 3 version, it has small extensions sticking out from the edge of the platform. These extensions look like miniature clones of Dark Moray itself, but without horns and abscesses, and they have flat teeth instead.

Dark Moray possesses the ability to control frost and ice. Rather than controlling these elements directly, however, he can take people's negative feelings such as grief and sorrow and mold them into ice and frost. It can either shoot out large, slow-moving orbs that will create a small explosion that freezes everything within its radius, or launch an icy breath that instantly creates large spiky ice pillars. When not using its ice-related abilities, it can also fall and spin his body around to throw and damage enemies, though his range is limited to his platform.

With the aid of the platform it is stuck to, Dark Moray can generate a icy force field around itself for protection that instantly freezes those that touch it. In the Wii/PlayStation 2 version, this force field is generated using machinery on the platform (which might hint that Dark Moray has the ability to interact with machinery) while in the Xbox 360/PlayStation 3 version, it is generated by miniature extensions of itself that crawl out from the edge.

Dark Moray, from the Wii/PlayStation 2 version of Sonic Unleashed.

An eel-like beast composed of Dark Gaia's energy with the ability to breathe ice to attack.

Dark Moray is the second nighttime boss in the Wii/PlayStation 2 version of Sonic Unleashed, and the game's overall fourth boss. It is fought with Sonic the Werehog, but can first be encountered after unlocking its Boss Stage in Holoska's Gaia Gate, which can be done after completing Cool Edge Night Act III: The Temple of Ice. The boss battle takes place in a closed arena with a metallic platform.

At the beginning of the fight, Dark Moray puts up a shield, and the player's first task is to remove it. To do this, Sonic must destroy four pairs of shield generators while avoiding Red Nightmares and Deep Nightmares, and later on, Dark Moray's ice balls and Killer Bees. Once the shield goes down, Sonic can jump on it and attack Dark Moray itself. At this point, it will use several attacks, including ice breath, ice balls, and slamming its head down to whirl it around in circles. Its ice attack in particular can all freeze Sonic.

To defeat Dark Moray, the player must hit it several times, until it spits out three ice canisters. Sonic must then pick up a canister and throw it at Dark Moray to freeze it. While Dark Moray is frozen, attack it until its Health Gauge is down by a third, upon where Sonic will get knocked off the platform. This process must be repeated three times to defeat it.

The time needed to "S" Rank is 5:00. Failure to make that time will yield a "C" Rank. Therefore, no Sun Medal will be awarded. 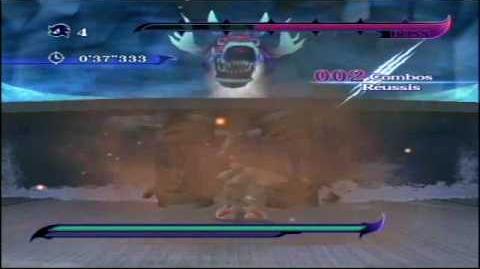 Dark Moray, from the Xbox 360/PlayStation 3 version of Sonic Unleashed.

An eel-like beast composed of Dark Gaia's energy with the ability to breathe ice to attack.

Dark Moray is the second nighttime boss in the Xbox 360/PlayStation 3 version of Sonic Unleashed, and the game's overall fifth boss. It is fought with Sonic the Werehog, but can first be fought after unlocking its Boss Gate in Holoska's Entrance Stage, which can be done by completing the nighttime version of Cool Edge Act 1. The boss battle takes place in a closed arena with a metallic platform filled with Rings and ice canisters.

At the beginning of the fight, Dark Moray puts up a shield to protect itself. If Sonic touches this shield, he will instantly get frozen. In this phase, Dark Moray will constantly shoot balls of ice that can freeze Sonic if hit. To remove the shield, Sonic must defeat the smaller versions of Dark Moray that pop out of the holes spread along the platform's wall.[1] These minions are notoriously difficult to defeat if the player does not have enough of the Werehog's Skills or Strength as they attack quickly and give Sonic little time to hit them since they quickly retreat into their holes. However, the player can throw the ice canisters at the base platform at the minions or lure Dark Moray's own attacks into them. This will freeze the minions, which makes defeating them a lot easier.

After defeating enough of the minions the shield will power down. Sonic must then climb up on Dark Moray's platform to confront Dark Moray directly. Dark Moray now uses a new attack which he will breathe trails of ice towards Sonic for a short period of time before tiring out for a bit. These trails of ice will thaw out after a short while or can be destroyed by attacking them. Dark Moray can also attack by slamming its head on the platform and spinning itself around the platform. Regardless of which attack Dark Moray uses, the player must hit one of its three glowing green abscesses to damage it. Once again, the player may use the ice canisters to freeze Dark Moray to prevent it from retaliating during Sonic's attack. The first abscess (on its belly) is the easiest to hit. The second abscess (on its back) may require Sonic to attack from mid-air. The third abscess (on its forehead) is a little harder, as the player must wait for Dark Moray to use the third attack before freezing it so Sonic can hit the abscess.[2] After destroying one of the abscesses, Sonic will be forced off the platform while the shield is put back up. Repeat the aforementioned process two more times after that and Dark Moray will be defeated. 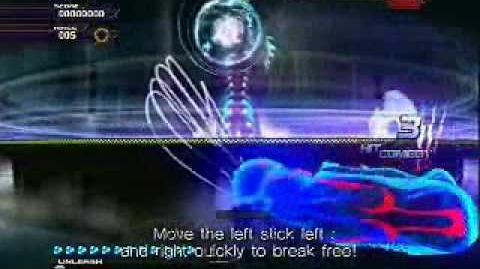