Southeastern border of the Grand Kingdom

The Dark Hollow (ダーク・ホロウ, Dāku horō?) is the thirteenth and final area of Sonic and the Black Knight. It is where Sonic fights the final boss, Merlina as the Dark Queen. This is also where Sonic transforms into Excalibur Sonic by using the power of Caliburn and the three sacred swords wielded by the Knights of the Round Table. The area represents Camelot Castle at the epicenter of Merlina's black magic vortex. Here, the cheerful medieval city transformed into a brooding, crown-shaped fortress.

The crimson-red area seems to be similar to the world in which Darkspine Sonic battled Alf Layla wa-Layla.

Sonic learns Merlina's purpose for committing such an act of devastation and engages her in a fight, but in her new form, she severely overwhelms Sonic and Caliburn is cut in half. Despite that his life is an inch from death and his fellow Knights of the Round Table pleads the Knight of the Wind to stop, he is still willing to do what needs to be done and as such, he transforms into Excalibur-Sonic, and battles the Dark Queen. Merlina is defeated and the Dark Hollow disappears.

As seen in a cutscene. 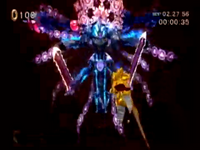