The Dark Gaia Phoenix, from the Xbox 360/PlayStation 3 version of Sonic Unleashed.

This divine protector of the Chun-nan people was tainted by Dark Gaia's influence and went berserk, leaving its usually quiet existence in the depths of the Gaia Temple.

The Dark Gaia Phoenix[1] (聖獣ダークフェニックス[2], Seijū Dāku Fenikkusu?, lit. "Divine Beast Dark Phoenix") is a character that appears in the Sonic the Hedgehog series. Originally a benevolent phoenix, this magnificent creature became corrupted by Dark Gaia's energy and went on a rampage until Sonic the Werehog and Chip managed to restore him to his former self. He is the guardian of the Gaia Temple in Chun-nan.

The Dark Gaia Phoenix stands out as a very large creature, about ten to twelve meters tall. While he mostly resembles a phoenix, he also possesses some peacock-like traits such as a long, slender neck and long eye-spotted feathers as its tail feathers and on his abdomen and head. In his natural form, he has a beautiful multi-colored glowing plumage, complete with a golden torso, neck and tail, violet wings with a golden edge, and a green and red head with violet eyes.

After being corrupted by Dark Gaia's energy, the Dark Gaia Phoenix's entire body becomes dark purple and he is constantly surrounded in flames.

Unlike the majority of Dark Gaia's Minions, the Dark Gaia Phoenix is not originally a fragment of the creature's essence, but an independent creature of his own. Originally, the Dark Gaia Phoenix was a regular phoenix who resided in Chun-nan and had served as the protector of Chun-nan's people and guardian of the local Temple of Gaia for an unpresented amount of time. It spends most of its time living quietly at the temple, but reveals itself once a year at the Meat Bun Festival. According to Zonshen, he has been taking care of the phoenix.

At the beginning of Sonic Unleashed, however, due to the actions of Dr. Eggman, the Chaos Emeralds were left drained of their power in his attempt to awaken Dark Gaia. This disturbance in the emeralds' power caused the Phoenix to go berserk, and it was soon after tainted by Dark Gaia's energy that had spread across the globe, thus it mutated into the Dark Gaia Phoenix and went on a total rampage.

By the time Sonic the Werehog and Chip arrived at Chun-nan's Temple of Gaia to search for Zonshen, the Dark Gaia Phoenix had apparently assaulted its old friend. As soon as Sonic and Chip came to Zonshen's aid, however, the Dark Gaia Phoenix attacked them. Despite its continuing persistence, Sonic managed to defeat the great beast and subdue it long enough for him and Chip to restore one of the Chaos Emeralds.

With the restoration of the emerald, the Dark Gaia Phoenix was returned to normal and it regained its senses, and Sonic and Chip understood the reason for the Phoenix's transformation. After accepting some chocolate from Chip, the phoenix soon after returned to the Temple of Gaia to resume its duty as the temple and Chun-nan's guardian.

Much like its namesake, the Dark Gaia Phoenix is shown to possess pyrokinetic abilities. He can envelope himself in an aura of flames that can make Sonic the Werehog catch on fire (and slowly drain his health) if he makes physical contact with the phoenix by either attacking or touching him, just like the Fire Master, and he can send out waves of flames by stomping onto the ground. He also appears to possess great physical strength as seen on the Xbox 360/PlayStation 3 version, where he can make entire towers crumble by simply flying into them.

The Dark Gaia Phoenix's greatest weakness, however, is water, which he appears to be highly vulnerable to; if dowsed with water, his flames will go out and he will be so exhausted that he has to land in order to rest and reignite.

The Werehog fighting the Dark Gaia Phoenix, from the Wii/PlayStation 2 version of Sonic Unleashed.

A phoenix being corrupted by Dark Gaia's energies that can envelope itself on fire and shoot feathers.

The Dark Gaia Phoenix is the first nighttime boss in the Wii/PlayStation 2 version of Sonic Unleashed, and the game's overall second boss. It is fought with Sonic the Werehog directly after clearing Dragon Road Act III: Path to Darkness. The boss battle takes place in an area with self-generating water barrels.

The Dark Gaia Phoenix starts off by firing several feathers at Sonic. Dodge them. When the boss charges up for a larger attack, jump up to one of the platforms and throw a water barrel at him and his fire aura will fall, giving you a window of opportunity to attack. If you do not throw a water barrel at the Dark Gaia Phoenix, he will launch feathers that will home in on Sonic and possibly destroy the water barrel. A button sequence (QTE) will play, giving you a chance to damage him more. The amount of water barrels to douse his fire aura increases by one every time you deplete a third of his health. After Sonic the Werehog attacks him, he stomps on the ground and creates a fire earthquake. After 3 attacks, he will fall.

The time needed to "S" Rank is 5:00. Failure to make that time will yield a "C" Rank. Therefore, no Sun Medal will be awarded. 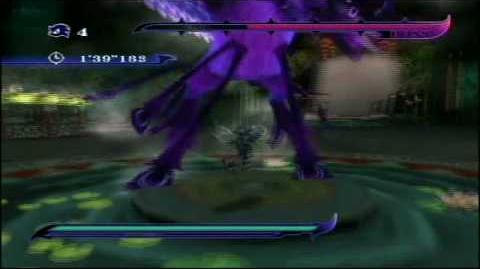 The Werehog fighting the Dark Gaia Phoenix, from the Xbox 360/PlayStation 3 version of Sonic Unleashed.

A phoenix being corrupted by Dark Gaia's energies that can envelope itself on fire and shoot feathers.

The Dark Gaia Phoenix is the first nighttime boss in the Xbox 360/PlayStation 3 version of Sonic Unleashed, and the game's overall third boss. It is fought with Sonic the Werehog directly after clearing the nighttime version of Dragon Road Act 1. The boss battle takes place in an area with self-generating water jugs.

The Dark Gaia Phoenix starts out by shooting homing feathers at Sonic. Then it will fly around and land with a fire earthquake. Sonic will not be able to attack the phoenix while it is encased in fire.[3] He can only hit it by throwing water jugs after it uses this attack; otherwise, the phoenix will destroy them. After getting hit by a water jug, the Dark Gaia Phoenix flies over to one of the platforms to rest.[4] Go over to it and hit it a few times to initiate a short QTE. After that, Sonic will punch him before leaping off and howling. After attacking it, it will fly around a bit before charging at Sonic, then fly up and come back down with a fire earthquake before repeating its usual pattern. It also gains a new attack which is shooting a barrage of feathers at Sonic. Guard to protect Sonic from this attack. At this point, Sonic is required to toss two water jugs at the Dark Gaia Phoenix to weaken the flames. After completing the third QTE, which requires the player to push the

six times, Sonic will grab the phoenix and throw it into the pool in the middle of the stage and the Dark Gaia Phoenix is defeated. 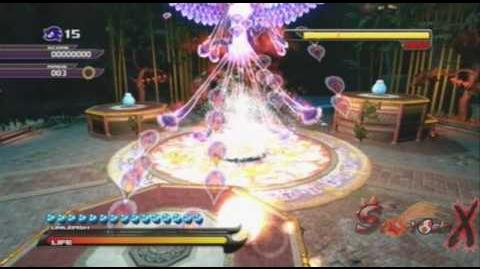