White and magenta with black sclera

These serpentine sneak dwell in the cracks in walls and floor, and fire energy bullets from their mouths. As very territorial creatures, they get snarky if anyone tries to enter their nest.

The Dark Eel[1] (ダークイール[2], Dāku Īru?) is an enemy that appears in the nighttime stages in the Xbox 360/PlayStation 3 version of Sonic Unleashed. They are a variant of Dark Gaia's Minions which reside in cracks and will suddenly pop out of the ground to attack any intruder.

The Dark Eels mostly resemble a cross between a serpent and a larva. They are several meters long with a large and wide head, and have a set of horns on the sides of their head and one on their forehead. They also have neon blue skin with glowing, purple markings, and they emit purple smoke.

The Dark Eels tend to reside inside cracks in the walls or on the ground, where they make their nests. They are fiercely territorial and will get outraged and attack anyone who gets too close to their nests.[1]

In gameplay, the Dark Eels appear before the player in order to attack them by emerging from the ground. When they are about to emerge, purple smoke will emit from their entry point. They also have above average defenses that severely reduce the damage dealt by Sonic the Werehog and leave them less prone to flinching. However, like the Evil Flowers, the Dark Eels are stationary and cannot move from their position in order to avoid damage.

In battle, the Dark Eel will attack by shooting three energy balls simultaneously at the player for long-range attacks, which can cover a wide area. However, these shots are slow and can only travel in straight lines, making them easy to avoid or guard against. When close up, they will attack by slamming their bodies down on Sonic.

Upon the reconstruction of Dark Gaia by Dr. Eggman, all of the Dark Eels (along with the other types of Dark Gaia's minions) were returned to the beast, who was later defeated and sealed within the planet's core.

As a Dark Gaia minion, the Dark Eels can possess people by latching onto the deepest, darkest part of the heart, and generate despair, negative emotions or even erratic behavior that are completely opposite to the person's personality.

The Dark Eels have sufficient burrowing skills, enough to let them burrow through even solid rock and create entire nests underground.[1] They also have limited energy manipulation, allowing them to fire multiple pink energy balls from their mouth.

The Dark Eels make an appearance in the Sonic the Hedgehog comic series and its spin-off comics published by Archie Comics. In this media, they are Dark Gaia Creatures that began emerging from the core of Sonic's world during the Shattered World Crisis. They first appeared in Sonic the Hedgehog #260, where several Dark Eels and other Dark Gaia Monsters were roaming the waters surrounding Meropis. Once the city lost its protective shield, the Dark Eels and their kind invaded the city. 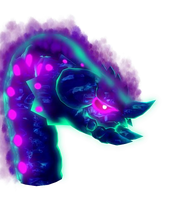