You can grab these harmless guys for a ride.

The Dark Bat (ダークフロート, Dāku Furōto?, lit. "Dark Float") is an enemy that appears in the nighttime Stages in Sonic Unleashed. They are a variant of Dark Gaia's Minions and the air troops of their kind, though they are quite harmless. They serve mostly as a method for the player to travel across gaps.

The Dark Bats have blue, egg-shaped bodies with black purple eyes and small horns on top. Their lower body is mostly a large lower jaw with jagged fangs and a horn-like growth with circular, magenta markings on each jaw joint. They also have two feelers on the chin and a thin tail on their back.

The Dark Bats and the rest of Dark Gaia's Minions came into being when Dark Gaia broke apart at the beginning of Sonic Unleashed due to its premature awakening by Dr. Eggman. These fragments were then spread across the earth and became Dark Gaia's Minions, with the Dark Bats amongst them. They first appear in Rooftop Run Night Act I: Alleys of Spagonia in the Wii/PlayStation 2 version and Windmill Isle Night Act 1 in the Xbox 360/PlayStation 3 version.

The Dark Bats are easily the most harmless and weakest of Dark Gaia's Minions, as they never attack the player or have attacks to deal damage with, and can be taken out with one or two hits.

In gameplay, the Dark Bats can be grabbed by Sonic the Werehog to travel over bottomless pits or large gaps. In the Xbox 360/PlayStation 3 version, the player can use the Dark Bat to pull Sonic towards safe ground or another grabbable object, while in the Wii/PlayStation 2 version, the player can hold onto the Dark Bat and ride it through the air while controlling its movements by swinging. In the cases where they are needed for transport, killing a Dark Bat will only cause another one to instantly appear and take its place to prevent the player from unintentionally halting their progress.

Upon the reconstruction of Dark Gaia by Dr. Eggman, all of the Dark Bats (along with the other types of Dark Gaia's minions) were returned to the beast, who was later defeated and sealed within the planet's core.

In Sonic Runners, a red and green variant of the Dark Bat can be obtained from the Premium Roulette as Rare Fly Type Buddies called Crystal Monsters (L). These Buddies carry either a red or green Crystal with their tails, depending on the color of the Dark Bat, and will turn all large Crystals red or green when a certain combo is reached.

Despite being a member of a highly destructive species, the Dark Bats are quite harmless and not particularly hostile.[1][2] Flocks of Dark Bats makes their homes wherever the density of Dark Gaia's energy is at its highest and can feed off it.[2]

The Dark Bats are able to move around by teleporting into an area in a puff of purple smoke. As a Dark Gaia Minion, the Dark Bats can possess people by latching onto the deepest, darkest part of the heart, and generate despair, negative emotions or even erratic behavior that are completely opposite to the person's personality.

The Dark Bats are able to levitate and move through mid-air, albeit at a rather slow rate. However, they are capable of carrying a great deal of weight, such as Sonic the Werehog, without straying from their path.

The Dark Bats made an appearance in the Sonic the Hedgehog comic series and its spin-offs published by Archie Comics. In this media, they are Dark Gaia Creatures that began emerging from the core of Sonic's world during the Shattered World Crisis. They first appeared in Sonic the Hedgehog #260, where a swarm of Dark Bats and other Dark Gaia Monsters could be seen terrorizing Westopolis in video footage. 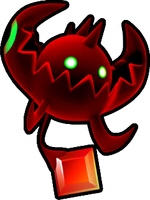