A racetrack through the Eggman's factory part of the ship.

Dark Arsenal is a race track that appears in Team Sonic Racing. It is based off the track of the same name from Sonic & Sega All-Stars Racing.

Dark Arsenal is located on a deck in the Final Fortress, a huge flying fortress created by Dr. Eggman. This track has the player riding inside the weapon factory area of the Final Fortress. It is a forbidding leviathan of steel, chock-full of bottomless drops, with numerous points on the track having enemy assembly lines in the way with robots on conveyer belts. Eggman's machinery can also be seen working in the background, such as two large generators and large missiles being loaded into their launchers. A mass-produced Death Egg Robot model, which is under construction, can also be seen in the center of the track.

A couple of blue Eggpawns can be found along this track, which can be destroyed with Wisp power-ups or Power-Type characters. If anyone else besides a Power-Type character collides with an Eggpawn, they will take damage and spin out temporarily. At different point along the track are also mechanical handles carrying Egg Hammers across the road. Should the player drive into these Egg Hammers, they will spin out and take damage, even if their playable character is a Power-Type.

Worth mentioning is that after each of the downhill sloping routes leading to the center of the track, a wide spring appears. This gimmick allows the player to jump onto the bumper-like platform on each side of the Death Egg Robot in the middle of the track and bounce off it, allowing the player to skip a major swing in the road. However, the player has to watch out for a large burner, which will emit periodically from the bumper-like plaform and can hit the player, causing them to fall into the abyss.

Dark Arsenal also has its own mirror image version of it where the left and right sides are interchanged. 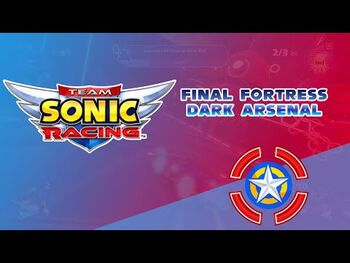