Daikun (ダイクン, Daikun?) is a character that appears in the Sonic the Hedgehog series. He is an anthropomorphic koala from Blaze's world and a member of the Coconut Crew youth association from Southern Island.

For an unprecedented amount of time, Daikun has lived on a little, seemingly deserted, island. Sometime prior to the events of Sonic Rush Adventure, Daikun came to know Marine when she was very young.

While living on his island, Daikun heard weird sounds coming from an island to the west. Finding it too noisy, Daikun traveled to the island to find the origin of the noise, where he discovered that it was like the island itself was shaking or at least something else suspicious.

In Sonic Rush Adventure, Daikun found Sonic, Tails, Blaze and Marine arriving on his island. Not pleased that the group had stepped onto his island, Daikun quickly confronted the group and demanded to know who they were and why they had come until he recognized Marine and calmed down.

After introductions had been made, Daikun apologized for his behavior by explaining that he did not know that they were with Marine. Seeing that Marine did not recognize him, Daikun assumed that Marine had forgotten about him, though Marine explained that she was too young to remember him. Having already mentioned about the island to the west, Daikun told the group about his own investigation of the island, and group decided to investigate it. 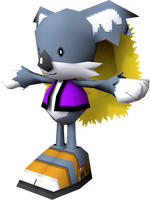