Sonic and Tails in Cyber Track, from Sonic Advance 3.

Cyber Track (サイバートラック, Saibā Torakku?) is the sixth Zone in Sonic Advance 3. It is a cyberspace-based region and one of the parts of the earth that Dr. Eggman created when he broke the planet apart with Chaos Control.

After defeating Eggman and passing through Twinkle Snow, the heroes advance to Cyber Track.

Like Egg Utopia, Cyber Track has gravity shifts that occur by themselves. These are often indicated by arrows on the "wall" pointing up or down. Like many other levels in Sonic Advance 3, this level is abundant with bottomless pits which makes the highest route often the safest, though it is possible to fall off the top of the screen due to the reversed gravity.

Other gimmicks to encounter in this Zone include Flywheels and cannons that catapult the player across a course, like the ones seen in Cosmic Angel Zone. There are also moving platforms everywhere; some travel along set paths, and some disintegrate when stood on. This Zone also brings back a few gimmicks from previous Zones, such as the giant clackers from Toy Kingdom and the rail platform rides from Ocean Base.

Starts off with a grind rail quickly separating into two rails. With the Zone's large assortment of gimmicks, the Act becomes a maze-like area. As usual, pitfalls inhabit the lower routes (usually under rails). A spinning wire will spin around players when holding on, and jumping off will send them flying into the direction of which they jumped. Entering a certain box will allow the player inside to travel between the paths of the Act into an exit point. Moving platforms similar to Ocean Base are also present, albeit with pitfalls below them. In addition to this, if the path the platform is riding on is narrow, players may get crushed if not careful. One-way surfaces above strong springs are also present. No matter the path, this Act ends with an upside-down rail ride leading onto a road of normal gravity straight to the Goal.

Starts off with a rather unique gravity section. Again, this will lead to multiple pathways. Gravity changing is a more commonly occurring gimmick here. Another unique gravity section appears about halfway past the stage. The ending path to the goal is a simple platforming section a few jumps away, and the Goal itself is situated on a small chunk of floating land, though there is another path somewhere which will launch the player directly to the Goal instead.

The riding platforms from the previous Acts are now much more present (and sometimes mandatory) in this Act. Unlike the two previous Acts, this one usually sports about two different pathways at a time (with minor detours) and most other sections seeming narrow and one-sided. At the last Checkpoint, players must carefully ride upon two platforms eventually leading into a path box (either path of the box leads the same way).

Act 3 ends with another fight with Gemerl, who utilizes all of his previous moves plus a new shield technique that initially guards him from the player's attacks and the ability to dash across the screen and release a wave of homing missiles. If Sonic is in the lead when Act 3 is finished, Cream will appear, claiming to have gotten lost, and be unlocked for the player to use in the main game and Time Attack.

Dr. Eggman and Gemerl are in a machine with a large pipe coming out of the top of it. The characters are on a platform above Eggman, who fires blue energy balls at the heroes. The player must jump into the balls and turn them an orange color and hit them off the walls in such a way that they can hit Eggman. As the battle progresses, Eggman fires the balls faster. After a few seconds of your standing on the platforms on the sides, they'll suddenly drop, resulting in an instant death. After being hit eight times (six in easy mode) with the orange balls, Eggman will escape with a damaged Gemerl. 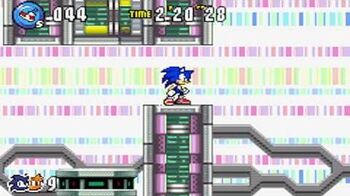 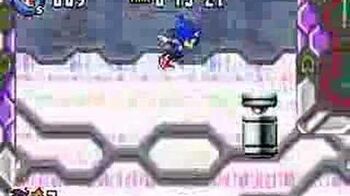 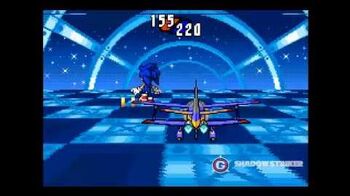