Monsters born of Dark Gaia with exceptionally high intelligence can take on a humanoid appearance like these fiends. As masters of curative magic, these phantoms go around healing their cohorts. For whatever reason, it isn't able to heal its own wounds, though.

The Cure Master (キュアマスター, Kyua Masutā?) is an enemy that appears in the nighttime Stages in the Xbox 360/PlayStation 3 version of Sonic Unleashed. They are a variant of Dark Gaia's Minions that resemble wizard-like phantoms. They specialize in curative spells that can heal their allies.

The Cure Masters bear a striking resemblance to the Dark Masters in overall appearance. The Cure Master's basic appearance is that of a humanoid phantom-like wizard. They are dressed in dark purple clothes with a purplish tint, have a pointy hat and cape, and are decorated with yellow symbols. The only parts on their body that are shown are their yellow eyes and some of their black faces. They are also always carrying a cyan colored, hook-shaped staff with several thin spikes and a thread hanging from the top.

The Cure Masters and the rest of Dark Gaia's Minions came into being when Dark Gaia broke apart at the beginning of Sonic Unleashed due to its premature awakening by Dr. Eggman. These fragments were then spread across the earth and became Dark Gaia's Minions, with the Cure Masters amongst them. Due to being born with high intelligence, they are able to take on a near-perfect humanoid appearance.[1] They first appear in Dragon Road Night Act 1.

In gameplay, the Cure Masters can fully restore the Life Gauge of all the nearby enemies that have taken damage by the player, but they are unable to restore their own health or utterly defeated allies. The Cure Masters always appear alongside other enemies to use their curative abilities, though there are never more than one of them in one group. They are usually paired up with a Power Master.

In battle, the Cure Masters focus foremost on casting their healing spells, though they can also attack the player with their staff by either using it as a club or by hammering it down on Sonic when enlarged. Additionally, the Cure Masters can move around in the air to avoid damage, which makes them hard to attack.

Upon the reconstruction of Dark Gaia by Dr. Eggman, all of the Cure Masters (along with the other types of Dark Gaia's Minions) were returned to the beast, who was later defeated and sealed within the planet's core.

The Cure Masters are able to move around by teleporting into an area in a puff of purple smoke. As a Dark Gaia minion, the Cure Masters can possess people by latching onto the deepest, darkest part of the heart and generate despair, negative emotions or even erratic behavior that are completely opposite to the person's personality.

The Cure Masters are born with exceptionally high intelligence.[1] They are masters at casting curative spells that allow them to restore the health of their nearby allies, which are not only limited to restoring the biological damage on Dark Gaia's Minions but also system damage on robots. For unknown reasons, however, the Cure Masters cannot heal their own wounds.[1] When casting their curative spells, they form a circular spell seal under them and send out purple orbs that restore allies upon contact. They also have the innate ability to levitate above ground and move through mid-air rather quickly. 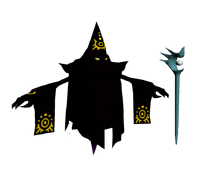